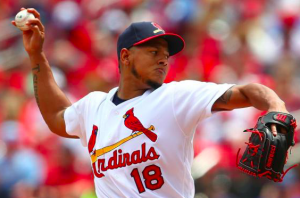 Just a few weeks ago, Martinez expressed the desire to spend his entire career with the Cardinals, and this extension is a big step towards making that a reality for the 25-year old. The deal caps off what must have been an emotional few weeks for Martinez following the loss of friend and former winter league teammate Yordano Ventura. The death of Ventura likely brought up painful memories of the death of former Cardinals outfielder Oscar Taveras, a teammate of Martinez in both the majors and minors.

“This is something I’ve always dreamed of,” Martinez said at a press conference on Tuesday. “As a boy growing up, for I waited on the day I could be independent and bring a future for me and my family.”

As part of the deal, Martinez will make $4.5 million this season before making $11.5 million in each of the next four seasons. The Cardinals then have a $17 million option for the 2022 season and an $18 million option for the 2023 season, with $500,000 buyouts for each season. If the Cardinals end up picking up both options, the contract will be worth a total of $85.5 million. The most Martinez has ever made in a season before this year is $539,000.

“Thinking ahead to the future, I thought it was an opportunity I couldn’t let go of,” Martinez said about the contract. “I was extremely happy and excited I feel its something I deserve. The contract will be long enough to prove what I’m capable of and I’m really thankful for that.”

As grateful as Martinez is to have his future with the Cardinals solidified, the team is equally thrilled to have him on board for the long haul. “Carlos felt it was important to get something done now, so did the Cardinals,” said St. Louis GM John Mozeliak. “Knowing Carlos Martinez can anchor this rotation for the next five years, feels and sounds pretty good to me.”

Martinez has undoubtedly been the Cardinals’ best pitcher over the last two seasons since moving into the St. Louis rotation full time. He won 14 games with a 3.01 ERA in 2015 and showed remarkable consistency by winning 16 games and posting a 3.04 ERA last season. Martinez has also been one of the best pitchers in baseball at inducing double plays since he came into the league.

The Cardinals are banking on Martinez becoming their undisputed ace in the years to come, particularly with the decline of the aging Adam Wainwright and Michael Wacha’s struggles last season. Martinez appears perfectly suited to fill that role, and if he continues to pitch the way he has the last two seasons, he will not only be the ace St. Louis needs, but he may actually end up being a bargain.

With Martinez now locked up, the Cardinals have the core of their rotation set for years to come. Wacha is under team control through 2019, Mike Leake is signed through 2020, rising star Alex Reyes is under team control through 2022, and even Wainwright has two more years left on his contract. If that group of five can stay healthy, the Cardinals should have one of the most reliable rotations in baseball, with Martinez leading the way.