Stephan Strasburg May Drop Windup in 2017 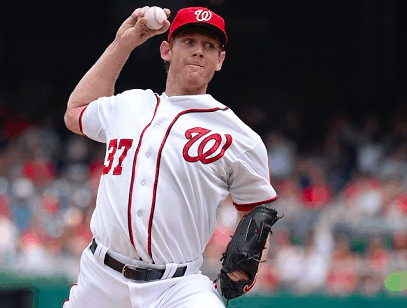 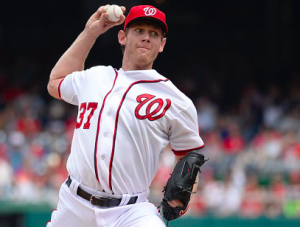 Washington Nationals ace Stephen Strasburg made his spring training debut on Friday. He threw 23 pitches over two shutout innings, and did so while pitching exclusively out of the stretch. Granted, spring training is a time of experimentation, but Strasburg ditching his windup and pitching out of the stretch may be something he continues throughout the entire 2017 season.

“I’m not trying to reinvent myself, but trying to simplify things as much as I can and be able to repeat my mechanics,” Strasburg explains.

It was after seeing pitchers like Darvish and Carrasco throw out of the stretch that Strasburg spoke to Washington pitching coach Mike Maddux, who oversaw Darvish when he made the change, about following their lead. Strasburg believes that the mechanics of his windup aren’t adding anything to his stuff, especially considering the torque and movement in his delivery. He’s been working on pitching out of the stretch all spring, and based on his first spring start, the idea has plenty of promise.

“He was pretty electric,” Nationals manager Dusty Baker said about Strasburg’s performance. “He was very sharp for his first time out. Didn’t see anything that was any different than how he started last year.”

Baker also downplayed the change Strasburg has made from the windup to the stretch.

“I didn’t think it was a big deal, really,” the Nationals skipper said. “As long as he feels comfortable, and as long as he was throwing strikes — it looked like it didn’t change his velocity, and his location was actually better.”

“I feel like as I’ve gotten older, for whatever reason, the windup’s just been an issue as far as getting that right feeling of staying on the mound, not drifting too much toward [the] first- or third-base side on my leg kick, and sticking the landing a little bit better,” Strasburg says about the change in his delivery.

Aside from improving his performance, part of the motivation for the change may be to prevent injury. The 28-year old Strasburg has had multiple stints on the DL each of the past two seasons. Only one of those injuries was related to his elbow, but there has been concern in the past about Strasburg potentially needing a second Tommy John surgery due to problems with his elbow. This is obviously a big concern for the Nationals, who signed Strasburg to a seven-year, $175 million extension last year.

“If you can keep and repeat your arm slot, theoretically it’s supposed to put less stress on your arm,” Strasburg says.

Maddux also believes that Strasburg can benefit from pitching out of the stretch if he’s able to adjust to the change.

“You can suffer injuries in this game from fastballs, curveballs, knuckleballs, changeups,” Maddux said. “It doesn’t matter. If you change a guy’s delivery, does that hurt his arm? No, you’re using the same muscles. They just fire in different order. So it’s just, that’s something that’s different, and your body got to adapt to what’s different and everything will be fine.”

Strasburg isn’t married to the idea of pitching exclusively out of the stretch this season, so there’s always a chance he reverts back to his full windup. However, based on the success he had in his first start, it’s something to keep an eye on as the rest of spring unfolds for Strasburg and the Nationals.