Stephen Piscotty Cleared To Return After Hit To Head 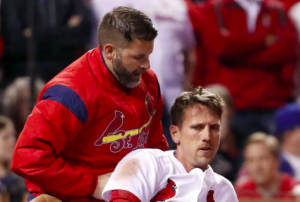 The St. Louis Cardinals are breathing a sigh of relief after outfielder Stephen Piscotty was cleared to return to the field after passing the league’s concussion protocol on Wednesday following a hit to the head Tuesday night. Piscotty appeared to be dazed and was forced to leave Tuesday’s game after a throw to the plate from Cubs infielder Javier Baez hit him in the helmet as he slid into home plate.

The throw from Baez that hit Piscotty’s helmet was the third time in that inning that the ball struck Piscotty. He first reached base after being hit on the elbow by a pitch from Jake Arrieta. Piscotty was then hit by a throw on his other elbow while taking second base on a wild pitch. Finally, while scoring from second on an infield single, Piscotty was hit in the head by the throw from Baez.

“I definitely didn’t black out, but I was stunned and didn’t realize what happened,” Piscotty explains, recalling what must have been a painful half inning for him. “After a few seconds, I just kind of figured I got hit in the face or something. But thankfully that helmet flap was there and took most of the force of it.”

The Cardinals took him out of the game immediately, not wanting to take any chances on Piscotty, who recently signed a six-year extension with the club.

“I haven’t seen that before, and to actually live it was pretty crazy,” Piscotty said of being struck by the ball thrice in quick succession. “I’m glad I’m OK. It was hard to believe that it happened in one trip around the bases. After it was over and what not, it’s kind of funny to look back on since I’m OK. But yeah, it’s something I’m not going to forget.”

After being hit on the head, Piscotty went through MLB’s mandatory concussion protocol on Wednesday and was cleared to return to the field. The 26-year old outfielder said that he felt the effects of getting hit by Arrieta’s pitch more so than the throw from Baez that knocked his helmet off.

Even though Piscotty passed the protocol, Cardinals manager Mike Matheny said he preferred to keep Piscotty out of the lineup on Wednesday to give him an extra day to recover from all three balls that hit him Tuesday night. Wednesday’s game ended up being rained out, opening the door for Piscotty to return to the St. Louis lineup without missing a game. However, Matheny wouldn’t guarantee that Piscotty would be in the lineup for Thursday afternoon’s makeup game against the Cubs.

“We’ll take today to take it easy and see how it feels,” Matheny said. “It’s good to get the other guys involved, too.”

The Cardinals don’t have a lot of outfield depth, and so the fact that Piscotty is likely to return to the lineup by this weekend is a huge relief for the club. Jose Martinez is the team’s primary backup in right field, although he has just 17 career big-league at-bats. The Cardinals could also look to get Matt Adams into the lineup after making the switch to part-time outfielder late in spring training. Of course, both would be a step down from Piscotty, who will hope to bounce back quickly following his unusual half inning against the Cubs Tuesday night.