Stephen Strasburg Leaves First Start Back From DL Due to Injury 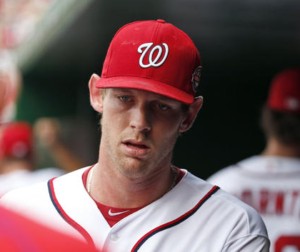 Nationals manager Dusty Baker insists that Strasburg was healthy and fully cleared to pitch when the team activated him from the DL before Wednesday’s game. “He did everything that was asked of him. He was cleared,” Baker said after the game. “He wasn’t trying to be a hero. He said that he felt fine. But a lot of times you really don’t know until you get into action.

“We thought everything was fine, because [catcher Wilson] Ramos said he was throwing the heck out of the ball. He said his changeup was outstanding, and he had good command. And usually if something’s wrong, you don’t have command. So we’re hoping that it’s something minor, but again, we’ll find out more tomorrow.”

Ramos said afterwards that he felt bad for Strasburg because he looked sharp through the first two innings before feeling that pinch in his elbow. “He was locating his pitches well,” the backstop said. “His velocity was good. When he said his arm was bothering him, I felt extremely bad, especially the way the game was going for him. It was going very well.”

Strasburg, of course, is no stranger to elbow problems, having undergone Tommy John surgery in 2010, but he looked as healthy as he’s ever been through the first half of the season. However, Strasburg began to struggle in the three starts he made before the Nationals put him on the DL last month. Prior to those three starts, his ERA was 2.63. But following those three rough starts and Wednesday’s abbreviated outing, Strasburg’s ERA has climbed to 3.60.

Now, all the Nationals and Strasburg can do is wait for his MRI results and hold their breath. Even if the MRI shows no structural damage, Strasburg will likely need some time off to help ensure his elbow is ready for the postseason. Of course, with a little more than three weeks left in the regular season, there isn’t a lot of time left for Strasburg to miss before the Nationals will require his help in the playoffs.

Washington has the rotation depth to get through the rest of the regular season without Strasburg, but they will undoubtedly need him in the postseason if the Nationals expect to reach the World Series. If Strasburg ends up being ruled out for a significant period of time, it would certainly dampen Washington’s postseason chances.