Steve Bartman Hoping For A Cubs Win And To Be Forgotten 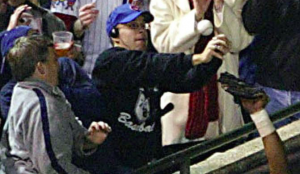 During Game 1 of the World Series, a sign at Progressive Field reading “Bartman for President” could be seen by those watching on TV at various points in the game. The sign even created a stir on social media. The sign of course, is a reference to Chicago Cubs fan Steve Bartman, who infamously interfered with a foul ball during the 2003 NLCS and was blamed by many Cubs fans when the team proceeded to implode and fail to reach the World Series after once holding a 3-1 series lead.

It’s been 13 years since that infamous night at Wrigley Field, and after that missed opportunity in 2003, the Cubs have finally reached the World Series after a 71-year drought. Unfortunately for Bartman, he has still not been forgotten by Cubs fans, the baseball world, or the Cleveland Indians fan attempting to troll all of Chicago by holding up a sign reminding everyone, Cubs fans in particular, of the bad luck they have endured during the more than 100 years since their last world championship.

Bartman, who is now 39 and still lives in Chicago, has intentionally stayed in the shadows over the last 13 years, far from the public eye. But with the Cubs in the World Series, it has conjured up the question over whether the city of Chicago would forgive Bartman for his mishap in 2003 if the Cubs were to win the World Series. However, according to Frank Murtha, a friend of Bartman’s who has acted as his agent and spokesperson for the past 13 years, Bartman is not looking for forgiveness from Chicago; instead, he simply wants to be forgotten.

“Steve just wishes the Cubs well and has no interest in being any distraction from whatever happens to them,” Murtha explains. “He is such a grounded, well-centered person that he doesn’t need the affirmation. He doesn’t seek forgiveness. None is probably needed.” Murtha also confirms that Bartman will be watching the World series, adding, “Steve is cheering for the Cubs and continues to be a Cubs fan.”

Unfortunately, Murtha also says that Bartman continues to receive threats from angry fans who still blame him for Chicago’s loss in the 2003 NLCS. Bartman simply wishes that all of the negative attention would go away. “He just wants everybody, moving forward, to respect his privacy and let his life continue to unfold as the grand plan has it. Unimpeded by things that… have been blown out of proportion,” Murtha says. “I think that’s the one message. It’s not necessarily a new one.”

Of course, it’s hard to imagine Bartman being forgotten any time soon. Even Cleveland second baseman Jason Kipnis, a native of Chicago who was a teenager during the 2003 NLCS, mentioned Bartman prior to the World Series, imploring the Cubs to have him throw out the first pitch at a World Series game at Wrigley Field. “I would love to see him throw out a first pitch,” Kipnis said. “Everyone would go nuts.”

However, Murtha said even if the Cubs invited Bartman, such a scenario is unlikely to happen. “The likelihood that he would return to throw out a first ball or anything like that is probably slim, none and no chance,” Murtha said. “Steve’s goal in all this has been to return to a normal life and the fact that we’re still talking about it 13 years after the fact is nothing short of bizarre.” Murtha would not comment on whether Bartman has returned to Wrigley Field at all over the last 13 years.

If the Cubs can win the World Series, would that be enough to make the people of Chicago forget about Bartman? No one can say for sure. Bartman, of course, would like to see the Cubs win, as he remains a fan. But even if they don’t, he still wants nothing more than all the attention, mostly negative, that he’s been paid to go away. “What’s his greatest wish?” Murtha said. “That this would go away and fade into the sunset.”