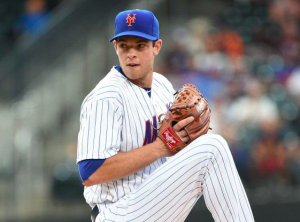 For the second time in less than a week, the New York Mets will be forced to make a change in their rotation due to one of their bright, young starters being unable to return from injury. Earlier this week, the Mets lost Jacob deGrom for the rest of the season due to a nerve issue in his elbow just one day before he was set to return to the mound. On Thursday, the Mets announced that lefty Steven Matz has been scratched from his start on Friday, when he was previously scheduled to return after more than a month on the DL.

Matz has not pitched since August 14 due to a shoulder impingement. He has also pitched much of the season with a bone spur in his elbow that may require offseason surgery. After throwing a bullpen session on Wednesday in front of Mets pitching coach Dan Warthen, Matz was penciled in to start Friday against the Philadelphia Phillies. However, Matz reported soreness in his shoulder to team doctors on Thursday, prompting the Mets to scratch him from Friday’s start. Gabriel Ynoa will start in his place.

Matz described the pain he felt in his shoulder Thursday morning as “a little different from regular soreness.” There’s no timetable in place for when Matz may throw another bullpen session in an effort to get back on the mound. Mets GM Sandy Alderson mused that with so little time left in the regular season, there may not be time for Matz to return. Had he pitched Friday, he would have been limited to 50 pitches with the hope of making one more abbreviated start in the regular season before possibly starting in the NLDS if the Mets advance that far.

The Mets were cautiously optimistic at best with regard to Matz starting Friday. At this point in the season, they’re almost expecting something to go wrong with regard to the health of their young pitchers. “The trainer walked into my office, and I started shaking my head,” manager Terry Collins said. “We’ll see what the next few days has in store,” he said of the situation with Matz.

The Mets are expected to send Matz to a doctor. It’s worth noting that he had an MRI last month that came back clean. Also, the team doesn’t expect his shoulder issue to be anything that may require surgery, meaning Matz will likely return to a rehab program. However, as Alderson mentioned, it may be too late in the season to get him back into the rotation.

With Matz all but out of the picture, the Mets will have to proceed with a rotation of Noah Syndergaard, Bartolo Colon, Seth Lugo, Robert Gsellman, and Ynoa, with the latter three being buried deep on the depth chart when the season began. The Mets have been pleasantly surprised with the performances they’ve received from Lugo and Gsellman while deGrom and Matz have been out, but playing the final 10 games of the season without many of their top starters feels like playing with fire.

The Mets enter Thursday in a three-way tie for the National League’s two wild card spots with the St. Louis Cardinals and San Francisco Giants. New York does play a rather favorable schedule down the stretch, but the Mets have cooled off following a hot streak earlier this month that saw them reach the top spot in the wild card standings earlier this week. The team was hoping that deGrom and Matz could provide a late-season lift, but now it’s all but official that the cavalry isn’t coming, making a return to the postseason all the more difficult for the Mets to achieve.