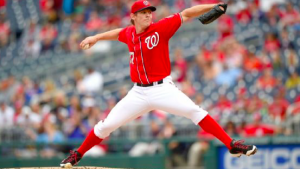 The Washington Nationals received some good news with a tinge of uncertainty regarding starting pitcher Stephen Strasburg Thursday afternoon. Strasburg underwent an MRI Thursday after leaving his start Wednesday night in the third inning after feeling a pinch in his elbow. The MRI revealed no structural damage to Strasburg’s elbow, but did show a strained flexor mass. The injury will keep Strasburg on the shelf for now, and at the moment the Nationals don’t have a timetable for his return.

There was some fear after Strasburg left Wednesday’s game that he had done damage to his ulnar collateral ligament, which could have forced him to undergo Tommy John surgery for a second time. The possibility prompted Nationals manager Dusty Baker to do “a lot of praying” Wednesday night. However, despite having no timetable for his return, Baker said the news on Strasburg’s elbow is the best-case scenario.

The Nationals had trainer Paul Lessard deliver the news at a press conference Thursday afternoon, a rather unorthodox move, as Lessard had never dealt with the media previously. “I know everyone was concerned that he re-injured that Tommy John ligament, and the answer is no,” Lessard said in his opening remarks. “The ligament is good.”

Strasburg’s start Wednesday was his first in nearly three weeks after spending time on the DL due to elbow discomfort. The Nationals did not have him undergo an MRI prior to going on the DL last month. However, Lessard says he did not see any major differences between the MRI taken Thursday and the one Strasburg had when he signed a contract extension with the Nationals in May.

“Unfortunately, it just happened on one pitch,” Lessard explained to the media. “It’s just an acute injury vs. an overuse injury.” He says he and the team’s medical team will take steps over the next few days to reduce the inflammation in Strasburg’s elbow as best as possible, which Lessard says is an important part of the recovery process.

“Normally, [these injuries] come around very well with treatment and strengthening programs,” Lessard said. “It’s not a season-ending injury, but we still need to take time that he’s nice and strong because of his past.” Of course, time is running out in the regular season, and even if Strasburg were to miss only three weeks, it could be difficult to get him in a game before the start of the playoffs. There is also some precedent for pitchers being diagnosed with a strained flexor mass only to need Tommy John soon afterwards.

Of course, the Nationals not only have to worry about Strasburg’s health for this postseason, but after signing him to a seven-year extension earlier this year, much of the team’s future is tied up in Strasburg being healthy long term. That could change the thinking for the Nationals, who held Strasburg out of the postseason in 2012 due to his innings count and concern over his long-term health.

So while the initial news on Strasburg may have been positive, there is still no certainty that he’ll pitch again in 2016. Even Strasburg’s manager is unsure what to think right now. “We have the personnel that we have. You can’t count on somebody else coming in here,” Baker said. “So we have to do is the best for the situation with what we have, and then make a determination on who is to take his place now and possibly later. Or is it a better option to not have Stephen, or do we not count Stephen out?” At the moment, no one appears to have the answer when it comes to Strasburg’s availability from here on out.