"Mr. Price has been given the "Billy Walters treatment" by the betting establishments in the Las Vegas area, due to his distinct ability to pick winners and cost casinos millions."
Home
Football
Tampa Bay May Have Saved Roberto Aguayo’s Career—But Should Have Seen The Melt Down Coming

Roberto Aguayo was an excellent kicker in college. During his time at Florida State, he made every extra-point attempt he tried and only missed nine field goal attempts in three years for the Seminoles (69-78; all misses were from 40+ yards). So it is not hard to see why the Tampa Bay Buccaneers were willing to spend more than a late round pick on Aguayo.

But many questioned the logic in using a second round pick on a kicker. Most teams don’t bother drafting a kicker till the later rounds if they bother drafting one at all. Why waste a pick when you can just invite four good ones to training camp and keep the best one? 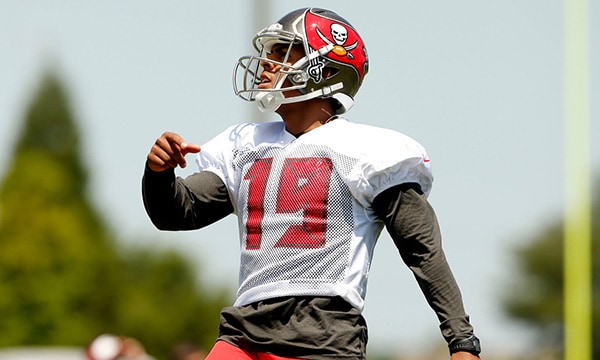 Many felt that it was a reach taking him as high as the Buccaneers did or a mistake since they have other, more pressing needs. What if he flops?

So far—he appears to be doing just that.

In the team’s preseason opener, he missed his first kick in the NFL—an extra point. After missing two kicks in last week’s preseason game (32-yards and 49-yards), the boo birds let him have it. The issues have persisted in practice as well. During a recent joint session with the Cleveland Browns, he missed three of six attempts, a 35-yard attempt to start the day and two from 45-yards.

Once again—the boo birds let him have it again even though it was just practice.

The last player a coach ever expects to have to answer questions about is the kicker, but when you take one in the second round expectations develop quickly. When he doesn’t meet those expectations–or even come close–his failure has to be addressed by the head coach:

Aguayo knows he is having trouble. He has admitted to feeling and being affected by the pressure which is why he is seeking a “mental coach” to help him with the mental aspects of the game. He is also talking with former NFL kicker Ryan Longwell and former Buccaneers special teams coach Bill Miller (PFT).

It is good that he is being so aggressive in trying to take care of whatever his issue is. While the Buccaneers do not want to think they may have wasted a second round pick, they may decide it is better to swallow the $1.59 million guaranteed in his contract and find someone else.

Someone in the team’s front office has to be wondering why they took him so high—especially when there were some red flags.

Rather than improve throughout his college career, his accuracy got worse. He missed one kick as a freshman (21-22), three as a sophomore (27-30), and five as a junior (21-26). To be fair, they were all from 40-yards or greater, but those are the kinds that set placekickers apart from the rest.

Maybe they were just hard kicks—or perhaps he had become complacent because of too much early success and his focus slipped. Only Aguayo knows for sure.

If his decrease in accuracy (95.5 to 80.8) was not alarming enough, his comments at the Combine should have been:

“To me field goals, it’s easier. The hashes are closer. Growing up I always thought, wow, NFL is much easier than high school, let alone college,” Aguayo said (NFL).

NFL easier than high school? The highest level of the game is easier than something Seriously?

Even if he had played for one of the best high school programs in the country (which he did not), this comment shows how he didn’t have a clue what he was getting into. Either that or he was so overconfident that his arrogance blinded him to reality—until it slapped him in the face when he missed an extra point.

On any other team, had he been a late round pick or signed as a free agent like most kickers, he would be competing for a job rather than having it handed to him. With how he’s been kicking, it wouldn’t be too hard to beat him.

So by drafting him as high as they did, the Buccaneers probably saved his career. Since they are not likely to give up quickly on a second round pick, he will have a chance to work his way out of his first slump.