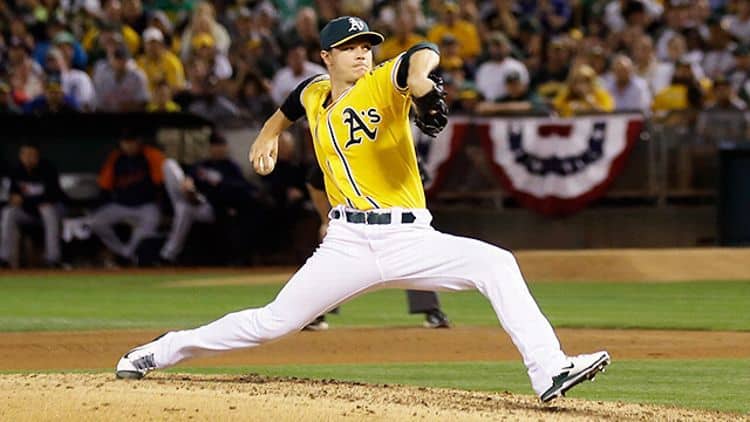 Sonny Gray gets the start for the Oakland Athletics.

The Tampa Bay Rays and Oakland Athletics will close out the final game of their 3-game set on Sunday after splitting the first two games of the series.

Both teams have been inconsistent throughout the year as Oakland enters the game with a 15-22 record, which is still good enough for 3rd place in the AL West. The Rays have been one game better with a 16-18 mark, putting them in 3rd place of the AL East and 7 games behind the first place Orioles.

Both teams have shown flaws in both their lineups and pitching rotation, and will be sending two pitchers with losing records to the hill to decide who takes the 3-game series.

For the Rays, left handed Matt Moore will get the start, bringing his 4.83 ERA and 1.341 WHIP on the year, and he’s currently lost 2 of his last 3 starts, and a no decision.

The Rays entered the season with high hopes, and have stumbled out of the gates thus far in the early going of the 2016 MLB season. There’s plenty of time left to turn it around but they’ll need more consistency from both their offense and pitching if they want to gain some ground before we enter the All Star Break. They’ve been a very streaky team, having lost 4 in a row before their win on Saturday night, and having won 4 games in a row before that streak.

Oakland’s pitching is clearly their worst weakness. Earlier this week, they had a 4-game stretch where they gave up consecutive double digit run totals, and they’ve won 2 of their last 12 games. It’s hard to imagine them pulling out of this nosedive without making some serious changes to their pitching staff, but they’ll hope to get things started with a win on Sunday and taking the 3-game series from the Rays.