Texans Owner Bob McNair Sounds Like He Might Be Ready To Throw In The Towel On Brock Osweiler—But Should He?

The Texans have a championship caliber defense in place. They have for a couple of years, and should for a couple more. They just need an offense that qualifies as “middle of the road” to be a serious Super Bowl contender. Brock Osweiler was supposed to be the guy to do that, but if his first year is any indication the offense will not be any better with him than it was with Matt Schaub during his final season with the team.

Fans cheered when Osweiler was replaced and will likely do so even more when/if he is released. However, he is still guaranteed $25 million. Bob McNair didn’t become rich enough to own a pro football team by giving away $25 million. 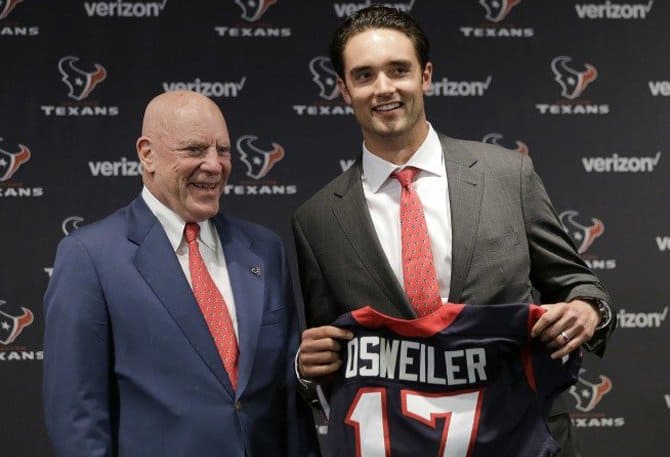 However, as long as Osweiler is the quarterback, mediocre may be the ceiling for the Texans. But who wants to own a mediocre team? Cutting Osweiler would show the fans how serious the team is about winning now. It sounds like McNair is considering it:

“We need a better performance out of the position..we’ll probably look at a young QB as we go into the draft.”

If they could draft a quarterback that could step right in, it would be easier to absorb Osweiler’s salary—especially if they get him in the latter rounds like the Dallas Cowboys did with Dak Prescott.

But is it possible they are giving up too soon on Osweiler? After all, he looked Osweiler did lead the Broncos to a win over the New England Patriots (with the help of a great running game that day). Maybe he just needs a little more time.

During the season, McNair sounded like he was willing to give it to him:

“He’s still basically a rookie,” McNair said in the Houston Chronicle. “He’s going to make some mistakes, but he shows that he has the talent, he has the ability and has the leadership that the team has confidence in him.”

Okay–but how much time do you give him? Do you roll the dice on another season with him? If he improves a little and the team wins ten games do you bring him back for another season? Or do you cut him loose now in hopes of picking up someone new that (possibly) be good enough to make the Texans contenders now?

You know—while the defense is still intact, relatively healthy, and not jumping ship for a bigger payday somewhere else.

There is already concern being expressed by some over J.J. Watt’s long term health, Jonathan Joseph, and Brian Cushing are not getting any younger, A.J. Bouye is a free agent, and DeAndre Hopkins is going to be a free agent after next season.

So do they roll the dice and give Osweiler one more year? Or do they cut him loose and move on to something better (which would be almost anyone)?

But if they were to move on from Osweiler, is there a better option available? 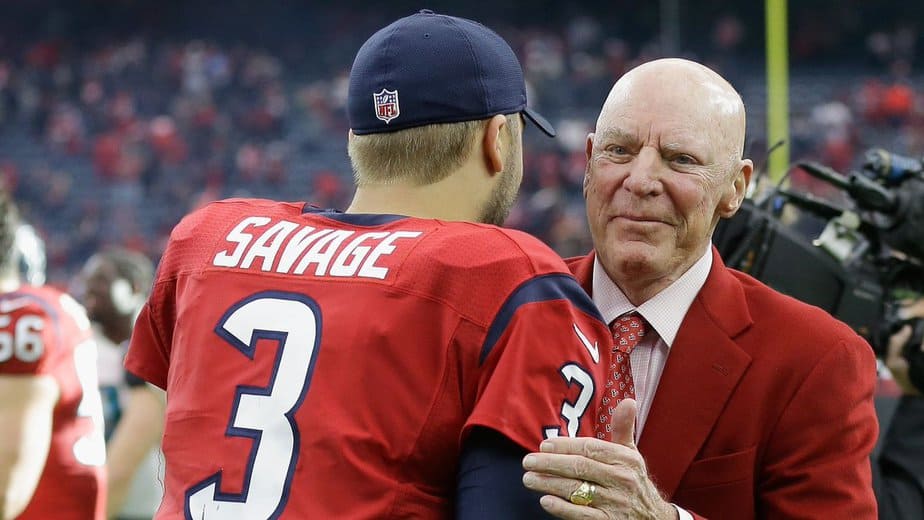 There’s Tom Savage. He didn’t look bad when he played after head coach Bill O’Brien finally benched Osweiler. But not well enough to get the job back after recovering from his concussion. Free agency is not an option. After swinging and missing with Osweiler, they can’t afford to pay any of the free agent quarterbacks worth having.

That leaves the draft.

The problem with the draft is figuring out when to take one so that they can still find quality players to fill other need—like the offensive line. Houston could go after offensive line help in free agency freeing them up to take a quarterback in the first round.

But if they could find the next Dak Prescott they could take an offensive lineman early and a quarterback in one of the middle rounds.

CBSSports.com has Alabama offensive tackle Cam Robinson going to the Texans with the No. 25 pick. As for quarterbacks, they have Mitch Trubisky and Deshone Kizer going earlier in the first round and Deshaun Watson going late in the first or early in the second. Patrick Mahomes would make for an interesting pick in the second round as well.

It’s unlikely the Texans will just cut Osweiler loose. They are on the hook for his salary so they might as well keep him as an option. You never know; maybe last season was an aberration. But it sounds like they are at least going to draft someone. How early they take someone will be a good indication of how serious they are about finding another option at quarterback.