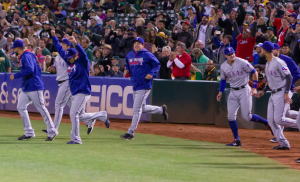 With a 3-0 win over the Oakland Athletics on Friday night, the Texas Rangers have clinched the American League West division title. The Rangers become the first team in the American League to book their ticket to the postseason. It is the 7th division title for the franchise and the second consecutive AL West crown for Texas, which won the division last year, only to be knocked out of the postseason in the ALDS by the Toronto Blue Jays.

This being the team’s second straight division title and following their early playoff exit last year, the Rangers had a somewhat subdued celebration afterwards, as if the team is saving its energy for more celebrations in the weeks to come.

“It feels great. This is only the first step to what we want to accomplish and we look forward to the challenge,” said Adrian Beltre during the celebration. “We know not just getting to the playoffs is enough for us. We have a good enough team to go all the way, and that’s what we’re looking for.”

“There are so many storylines about this team that are incredible,” explained manager Jeff Banister. “It’s a feeling of elation, and I couldn’t be more proud of them. I don’t know if I can exhale at all. It’s been a long road.”

Banister, like many of the players, is cognizant of the desire inside the clubhouse to advance further in the playoffs than they did last season. “It’s been a long road. And last season obviously how it ended last year, a gut punch. Coming into the beginning of the year we never had any doubts in this clubhouse with any of these players. This is only Stage 1. There’s so much more that these guys want to accomplish,” Banister said. “I wish we could have done it in front of our own fans. It’s an incredible, surreal feeling, but again we got a lot left to play for the rest of this season to try to get home field for our fans.”

“It’s unbelievable to be a part of this,” said center fielder Ian Desmond, who signed with the Rangers during the offseason after having limited options, only to end up a key piece of the puzzle for the Rangers. “We set out on a mission in Spring Training and everybody bought into it. This is just a part of it, the first step.”

An important part of Friday night’s clinching was the performance by starting pitcher Cole Hamels, who threw seven shutout innings to earn his 15th win of the season. Hamels has struggled over the last few weeks, and the Rangers will undoubtedly need him at his best once the playoffs begin. His performance Friday is certainly a good sign for Hamels, who also started last year’s division-clinching game for Texas.

The celebration in the clubhouse, while tame, also began with ginger ale out of respect for Jeremy Jeffress, who returned to the team on Friday after spending time in alcohol rehab, as well as Matt Bush, who also has had past issues with alcohol. Eventually, some champagne was popped.

The next step for Texas, as Banister mentioned, is to secure home field advantage throughout the postseason. The Rangers have 91 wins, just one more than both the Boston Red Sox and Cleveland Indians, meaning Texas will have to keep its foot on the pedal the rest of the season in order to finish with the best record in the American League. That may turn out to be a blessing in disguise if the Rangers hope to reach the World Series, which has become the clear focus of the team following their division title.