Texas Rangers Looking To Get Bullpen In Order Before Postseason 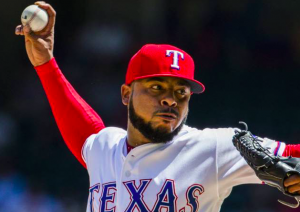 Now that the Texas Rangers have clinched the AL West, they can start getting ready for the postseason. At the top of the team’s list of priorities is getting their bullpen in order. The Texas bullpen has the second worst ERA in the American League, ahead of only the Minnesota Twins, and has been a weakness all season. There is much work to do, but the Rangers are hoping to get things straightened out.

Texas made a move to improve its bullpen on Friday when Jeremy Jeffress was activated from the restricted list after spending a few weeks in an alcohol rehabilitation center. Jeffress has thrown one simulated inning since returning to the team, and the Rangers will monitor him closely over the final week of the season to see if he could possibly help in the postseason.

Jeffress put up solid but unspectacular numbers after being traded to the Rangers from the Milwaukee Brewers at the trade deadline. However, he had 27 saves in 28 opportunities while with the Brewers and has established himself in recent years as a reliable late-game reliever, something the Rangers could use. Of course, with all the time he’s missed, there is no guarantee that Jeffress can get back on track before the playoffs begin.

The Rangers are not necessarily banking on Jeffress, but they are hopeful that Tony Barnette will be able to return from injury soon. Barnette hasn’t pitched since September 4 because of an oblique sprain, but he’s been one of the team’s most effective relievers this season. He threw a simulated game on Saturday, creating hope that he can return to the bullpen by the end of the regular season.

“It went well,” Barnette said about the simulated game. “We moved the schedule up. We are ahead of the pace. Take a day or two and give me live action. I’m ready to roll. I am ready to compete. I felt nothing. I was able to throw all my pitches and get extended. I am back to normal.”

Finally, the Rangers announced on Saturday that lefty starter Derek Holland will transition to the bullpen. Holland has had an up and down season, but has been particularly poor recently. There’s little chance of him being in the team’s postseason rotation, and so the Rangers want to see how he pitches out of the bullpen over the final week of the season to see if he can be used in that role during the playoffs. Holland has little experience pitching out of the bullpen, but considering the other options the Rangers have, it’s worth taking a look at him.

The Rangers have also announced that they plan to carry eight relievers during the ALDS, whereas last year they had just seven on the roster. Without knowing for sure if Jeffress, Barnette, or Holland will be on the postseason roster, it’s difficult to project what the Texas bullpen may look like during the ALDS. However, any of those three could make a meaningful difference for a bullpen that has performed poorly all season. We will find out over the final week of the season if those three can become useful pieces in the Texas bullpen during the postseason.