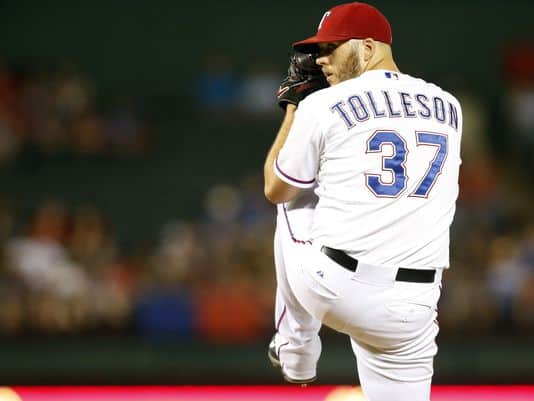 Shawn Tolleson will no longer be the closer for the Rangers.

Despite being tied, albeit a six-way tie, for the American League lead in saves this year, Shawn Tolleson will no longer closing games for the Texas Rangers. Texas manager Jeff Banister announced before Wednesday’s game with the Oakland A’s that the team is making a change in the closer’s role. Tolleson is out and Sam Dyson is in, at least for now.

Tuesday night’s blown save against the A’s, his fourth of the season, was the last straw, as Tolleson allowed a walk-off grandslam to Khris Davis with two outs in the bottom of the 9th. The Rangers have been walk-off losers six times this year, already matching last year’s total.

Tolleson converted eight of his nine save opportunities in April, somehow doing so with an ERA of 6.00, following up last year’s campaign in which he accumulated 35 saves in 37 opportunities, leaving little doubt heading into the season that he would be the team’s closer. However, he has blown all three of his save opportunities in May and allowed seven earned runs over his last two appearances, causing his season ERA to balloon to 9.20.

“(Tolleson) will still pitch, just in different situations,” Banister said Wednesday. “You look at his body of work and he’s been efficient, effective and sits atop the AL in saves. This is a tough stretch for him.” The manager adds that pulling Tolleson from the high-pressure role of closer will “give him an opportunity to exhale a little bit.”

The now former closer appeared to take the news well, saying, “It wasn’t anything that surprised me.” Tolleson went on to say, “More than anything else, I want to win games. I care about this team more than any team I’ve been a part of,” concluding, “For me, it’s me getting thrown out there in different situations to show I can earn my way back to a prominent role.”

In steps Dyson, who currently owns a 1.89 ERA but no saves in his major league career. “When you take all the factors, it points to Dyson to give the opportunity to close,” Bannister explains, referencing Dyson’s strong performance in one-inning stints since the Rangers acquired him from the Miami Marlins last season.

The Rangers had no cause to use their new closer in Wednesday’s 8-1 loss to Oakland. A loss that completed a sweep at the hands of the A’s and dropped Texas a game behind the Seattle Mariners atop of AL West standings. The hope is that a new pecking order in the bullpen will help the Rangers close out games and avoid any more walk-off losses in what could turn into a tight division race this summer.