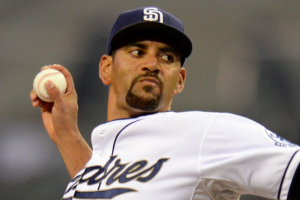 The Texas Rangers have signed starting pitcher Tyson Ross to a one-year deal. The team is yet to announce the deal, but multiple sources have confirmed that an agreement has been reached between Ross and the Rangers. Ross will reportedly make $6 million plus incentives in 2017. There were more than a dozen teams to express interest in Ross this offseason, giving him a number of options, including the world champion Chicago Cubs, who were said to have serious interest in him. In the end, Ross chose to sign with the Rangers, a team in need of rotation help.

Ross has spent the last four seasons with the San Diego Padres. However, Ross made just one start in 2016, doing so on opening day. He spent the entire season plagued by shoulder issues, and despite several attempts to rehab the injury and return, Ross never pitched in the big leagues after opening day.

In October, Ross finally made the decision to undergo surgery to treat thoracic outlet syndrome. The Padres then decided to non-tender him a contract for 2017, as Ross would have made close to $10 million in his final year of arbitration, an amount that was more than the team wanted to spend on a pitcher coming off of a serious injury. Despite coming off the surgery, Ross received vast interest on the open market, ultimately choosing the Rangers over a host of other teams.

Before experiencing the shoulder issue last year, Ross had three outstanding seasons with the Padres from 2013 to 2015. Between 2014 and 2015, Ross made 64 starts, winning 23 of them and accumulating close to 200 innings each season. If he can return to full health, Ross has great upside and could be worth far more than $6 million.

Of course, even if Ross puts up modest numbers in 2017, the Rangers will be satisfied, as he figures to hold a spot in the backend of their rotation. Cole Hamels and Yu Darvish remain the leaders at the top of the rotation for Texas. The Rangers are also expecting lefty Martin Perez to take a step forward in his development after making 33 starts for the club last year. The Rangers also signed free agent Andrew Cashner this winter, giving them four proven big league starters.

Ross is likely to fill the fifth and final spot in the Texas rotation, with A.J. Griffin and Nick Martinez also being candidates. The caveat with Ross is that he may not be fully recovered from surgery by opening day. This could force the Rangers to go with Griffin or Martinez until Ross is ready to make his big league return.

It’s possible that Ross takes longer than expected to return or doesn’t return to the form he had prior to the shoulder issue. There is less of a track record for pitchers returning from thoracic outlet syndrome than Tommy John surgery, and so nothing is certain. Nevertheless, taking a chance on a pitcher with Ross’ upside is a good move for the Rangers, who need rotation help. Texas would have been hard pressed to add a starter this winter with more talent and potential that Ross has showcased when healthy, and so signing him is worth the risk, whether it pays off or not.