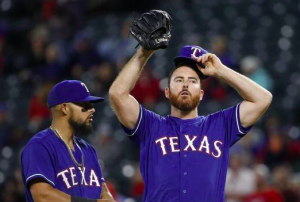 The Texas Rangers had the best record in the American League last season, but they’re already behind that pace after being swept by the Cleveland Indians in the season-opening series. The biggest culprit in the team’s three losses to open the season has been the team’s bullpen, most notably closer Sam Dyson, who owns two losses and an ERA of 78.00 after his first two appearances of the season. Nevertheless, Rangers manager Jeff Banister says the team is not going to panic after one series and won’t be making any radical changes in the bullpen.

“I think it’s a little early to reconsider things,” Banister said of his bullpen after Wednesday’s loss to the Indians. “We’ve been in this situation before. It doesn’t look good because it’s the start of the season. We got to find a way to figure it out. Sam’s going to figure it out. We’ll put our heads together and we’ll work on it.”

On opening day, Matt Bush failed to protect a one-run lead in the 8th inning by giving up a solo home run to Edwin Encarnacion. Dyson was then charged with three runs in the 9th inning, failing to complete the inning before being replaced. On Wednesday, Dyson began the 9th inning with a two-run lead, only to give up five runs, including a grand slam to Francisco Lindor.

In both appearances this season, Dyson has failed to complete an inning, but while Banister gave up on his closer in those outings, he has no intention of taking away the closer’s job from him.

“The guy has been really good for us,” Banister said. “I am not going to jump off him after two games.”

If nothing else, Dyson’s slow start has been puzzling. He was perfect last month while pitching for Team USA in the World Baseball Classic, tossing six shutout innings without allowing a base runner. He was equally impressive in spring training after returning to the Rangers. Dyson cites a simple “lack of execution” as the reason for his struggles early in the season.

“In the WBC, I had downward action on my fastball and guys were either swinging and missing or making weak contact,” Dyson explains. “I’ve made some pitches down in the zone and guys are either laying off or putting them in play and through the infield.”

Dyson also says that he’s put himself in a bad spot by allowing the leadoff batter to get on base, something that didn’t happen during the WBC.

“I think the last couple of times I went out there, I’ve given up a hit to the leadoff guy and subsequently walked the next guy or given up another hit, so I’ve had my back up against the wall in the past few outings,” Dyson said after Wednesday’s blown save. “I have the ability to get out of that by using the sinker and getting a ground ball. I haven’t been able to do that in those situations. That’s probably causing my failure.”

The Texas closer is understandably frustrated, as Dyson believes he’s making quality pitches but just isn’t getting the results he’s accustomed to getting with his stuff. It’s the same stuff that Dyson used to collect 38 saves and post a 2.43 ERA last season, and so the Rangers have every reason to believe he can turn things around.

If the team wanted to make a change, Jeremy Jeffress could be an option, as he had 27 saves in 28 opportunities with the Brewers last season before being traded to Texas. Bush could also be an interesting candidate after his impressive rookie season in 2016. It should be noted that the Rangers have made a change in the closer’s role in early May each of the last two seasons.

However, Banister has given Dyson a vote of confidence despite his struggles the first week of the season. Dyson’s battery mate and Team USA teammate Jonathan Lucroy is also confident the closer will get things turned around before a change becomes necessary.

“I think he’s just feeling for it a little bit,” said Lucroy. “He’s just trying to get his feel for it and get going. It’s tough sometimes. He’s very out of character right now with his stuff. It’s not there right now but he’ll get it going. Of that, I have no doubt.”