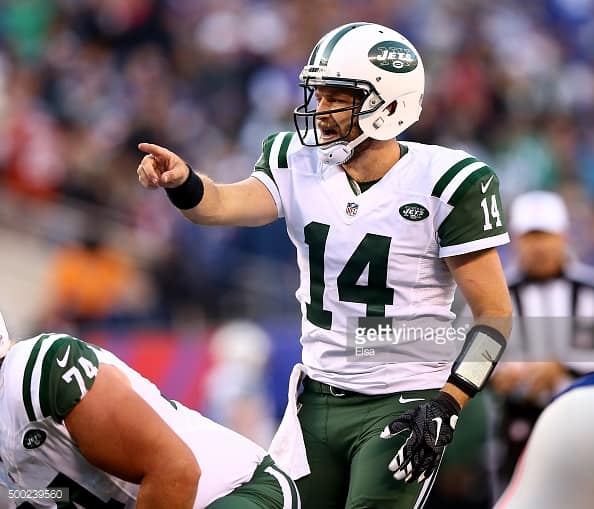 Why? Well—because he needs to realize (if he hasn’t already) that the Jets are the only team interested in paying him more than he made last season ($3.25 million). At the same time, if the Jets are forced to start Geno Smith or Christian Hackenberg it is going to be a long year for New York fans.

The latest reported offer is three-years for $24 million with $12 million in the first year (where he will likely still be the starter) and $6 million in the second and third seasons (when he will probably be the back-up). With incentives, the total value of the deal could reach $36 million.

This is a great deal for a 33-year old playing for his sixth team—and that guy should take it. It is not a great deal for the man who set the franchise record for touchdown passes in a single season, but that was last season. The Jets are more concerned with what they are going to get—and what they want from him–going forward.

Fitzpatrick has to know he is not the man of the future. He wouldn’t be for any team—which was made evident when no one showed any interest when he entered the free agent market. However, while this does give the Jets front office the power, Fitzpatrick has something working for him.

Smith was terrible before Fitzpatrick arrived and in limited time last season was still terrible. The team could go with rookie Christian Hackenberg, but doing so would be a gamble. There have been rookie quarterbacks that led their team to the playoffs (Ben Roethlisberger, Robert Griffin III, Andrew Luck, and Russell Wilson), but there have been many more that looked good that failed to lead their team to postseason glory (Marcus Mariota, Jamies Winston, Cam Newton, etc.).

Maybe Hackenburg thrives if he gets thrown to the wolves, or maybe he ends up being scared or life like David Carr.

He latest contract offer makes it sound like the Jets are willing to compromise with Fitzpatrick but still plan on keeping it real. They know they need him next season but only want him for the next two just in case.

Fitzpatrick’s desire to have a little more money on the back end of the deal is understandable, but he has to face facts—he may not even be on the roster next season. If he wants to get paid, he needs to take the deal now. If he does get more on the back end, that may only ensure he becomes a salary cap casualty next off-season.

It’s not an ideal situation to be in, but it is the best deal that he is going to get. So if he is as smart as a Harvard grad should be, he’ll take it. It’s either that or follow up on his threat to retire.

If he does, it is going to be a long year for Jets fans but if he signs the Jets will make the AFC East fun to watch.