Basketball is a game that revolves around the word SUPERIOR, but not PERFECT. For example, the best team of the regular season in history of the NBA – the Golden State Warriors, still recorded 9 losses during their quest for breaking the record last season. Another example are some of the best shooters of all time who still miss nearly as many shots as they make during the season. In both cases the word SUPERIOR can be used, but not PERFECT!!!

The same principle can be applied to the summer market in the NBA, when teams often make small steps backwards in order to ultimately make a huge leap forward. Our focus in this article is on the Chicago Bulls, who recently danced their waltz strictly backwards.

Their summer break started with a bomb, as it was announced that the former MVP, Derrick Rose, will continue his career with the New York Knicks. 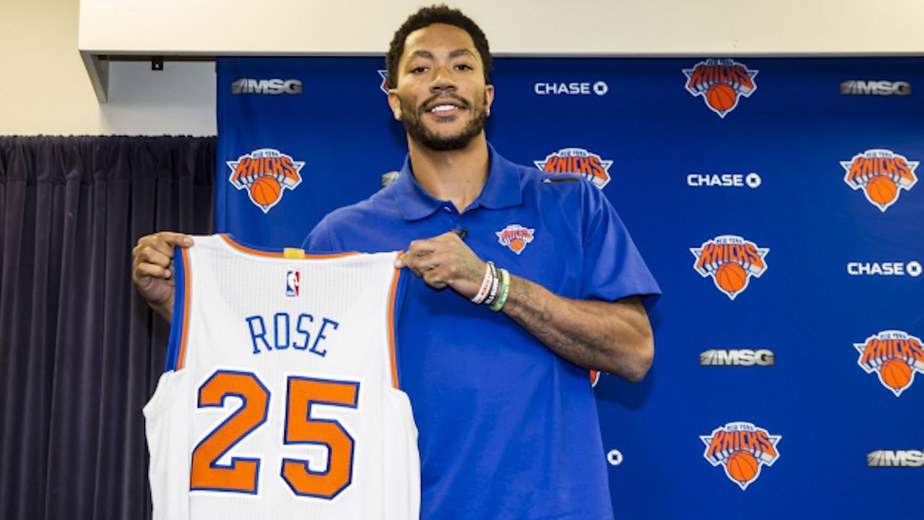 Derrick Rose signed with the Knicks in the off season!!!

But, let us go back several years ago, when the Chicago Bulls drafted a guy from the neighborhood at the 2008 NBA draft. Suddenly, a new epic story was born and the Windy City felt the title fever once again.  Rose has blossomed instantly, and after several seasons he was holding a trophy designed for the league’s Most Valuable Player after a season in which he led the Bulls to an amazing 62 wins. But the magic was gone after the new hero of the Windy city injured his knee against the Philadelphia 76-ers in Game 1 of the 2012 Playoffs. He repeated the injury couple of more times during the upcoming seasons, which came at a price as his unique athleticism and courage, who were his most dangerous weapons, started to fade away.

For the NBA fans and teams it was immediately clear that Rose would never be able to return his form from 2011, nor in Chicago or anywhere else.

So the Bulls came at the crossroads this summer, when Rose was in question, and decided that it is time to say goodbye. Their calculations were simple, the next summer, Rose would be a free agent and they would probably lose him anyways, without getting anything back in return for him, or, they could have made even a much worse decision, to sign him to a new multi-year contract. Signing a veteran point guard, who by the way is prone to injuries, to a new multi-year contract, would definitely anchor the franchise to the bottom.

Trading Rose to the New York Knicks, the Bulls acquired a solid center in Robin Lopez and a first-round draft pick PG Jerian Grant, who showed decent skills in flashes, but still his greatest quality comes in the role of a backup PG. The Bulls have signed Grant on a very low-cost contract for the next few seasons, which gives them flexibility in finding a permanent replacement for Rose while still developing potential young force.

Derrick’s departure leaves the Bulls without his alpha male mentality, which means only one thing – this is now the team of Jimmy Butler. 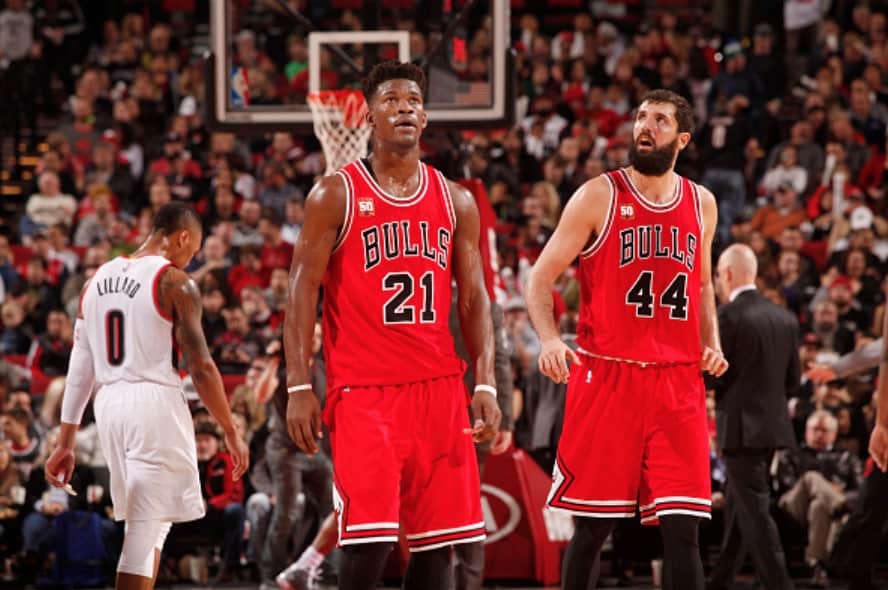 With D-Rose gone, Jimmy Butler takes the leader role on the team!!!

Now, that Rose’s contract has been terminated, the Bulls had a difficult decision to make. They had the option to build a complementary roster around Butler or to trade him as well and push the reset button and rebuild the franchise entirely.

They have not waited too long to make their decision, as they have decided to be competitive immediately, signing couple of veterans, who should be able to replace those veterans that left the team. Pau Gasol, Joakim Noah and Derrick Rose were traded and they took with them a lot of veteran experience but the potential finding of quality veterans who would replace those three, would instantly put the Bulls as a Play-off contender, without sacrificing the time, the season and a bunch of nerves of their fans.

But as we are already used to the decision making process of the Bulls management from the past, we basically knew what was coming. Namely, back in 2010, both Rose and Gasol have played at the All-star game. In order to replace the offensive force of those two, the Bulls management reached for and signed two more NBA veterans – Rajon Rondo and Dwyane Wade!!! 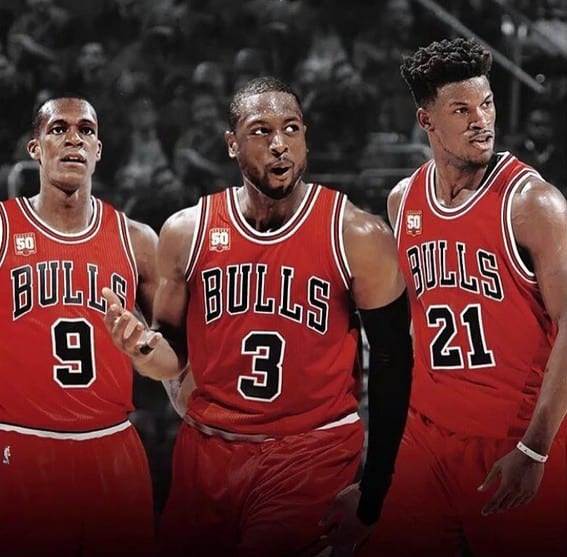 With only few week before the new NBA season start, many wonder how the Rondo-Butler-Wade trio will function on the court!!!

Last season, Rondo has filled his stats columns playing for the Sacramento Kings as he averaged 11.9 ppg, 11.7 apg, 6.0 rpg and 2.0 spg. However, the once known for his defensive abilities, Rondo found himself as the weakest link of the team in this segment. Not only did the opposing PGs penetrate past him with an ease, what was more concerning was the fact that no other NBA team has allowed a greater number of points per game last season than the starting Kings unit with Rondo on the court.

Signing Rondo as a replacement for Rose was a short-sighted decision based on Rondos former achievements and definitely not on the current state of his game. The 30 year-old PG can definitely  contribute to the team’s offense only then when the ball is in his hands; which is just the factor that will negatively affect Butler’s development as a guard and limit him to the role of a spot-up shooter.

However, the problem only becomes more complexed with matching Rondo and Wade in the backcourt. Dwyane Wade, a future Hall of Famer had a very good last season, recording 19 points per game and leading the Miami Heat to a 48 win season. He also competed in the All-Star game as a starter for the Eastern conference team. In the playoffs, “Flash” carried the entire team to the seventh game of the second round. One thing is clear, Wade is 35 years old and his 74 games played last season was the most he has played since the 2010-2011 season. Considering the fact that Wade suffers from chronic problems with his knees and meniscus, it becomes clear that his speed and athleticism will only decrease. Except for occasional flashes last season, Wade’s three-point shooting % has completely degraded. With Rondo on the court, the Bulls might be serious contenders for the worst shooting backcourt tandem in the league.

How poor the 3-point shooting could be for the Bulls in the new season shows the fact that the Rondo-Wade-Butler trio made “ONLY” 133 three-pointers combined last season. This number of made 3s was exceeded by 30 individuals only. Of the three, Rondo was by far the most accurate (36.5%), a fact that terrifies.

At this stage of their careers, Rondo and Wade have become the obstacles in defense (not for opponents), while both have a bad reputation as an outside shooters, a fact that makes their defenders leaving them wide open. Including the option at the center – Robin Lopez or Cristiano Felicio – 60% of the starting five would have horrible shooting percentages, which only concludes that Butler, who himself is not quite the most accurate shooter, is definitely going to have a much greater burden on the shoulders in the season ahead of us. 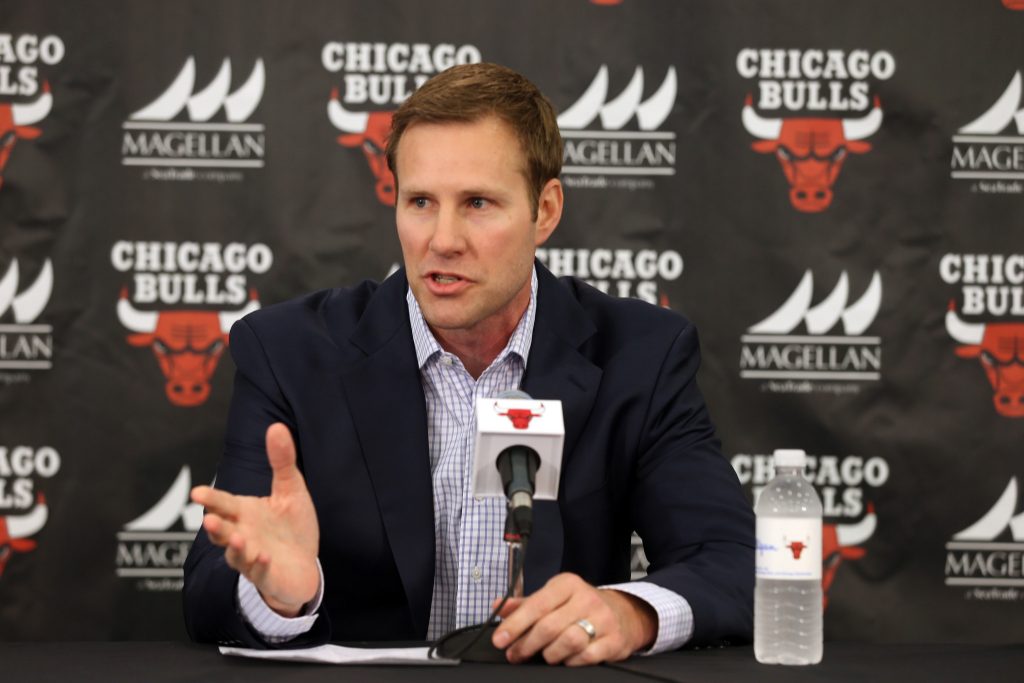 Fans have questioned Hoibergs coaching qualities after he decided to bench Noah!!!

The unavoidable fact to mention is most certainly the change at the helm of the team. The new face last season was Fred Hoiberg, a former Iowa State University coach. He was acquired shortly after the Bulls ditched Tom Thibodeau in a, put it mildly, uncivilized manner which caused a fierce reaction of the fans and the media.

First of all, there are those who feel that Thibodeau did a great job of reviving the team and bringing the team among the teams considered as the title contenders. He created a new culture, based on a strong defense and definitely returned the Bulls on the winning track. On the other hand, even a handful of those who believed that the franchise needed a change at the coaching position, condemned this move by the general manager Gar Forman, who has only continued to nurture the negative reputation of the organization in recent years.

Hoibergs first decision that was met at the knife was the benching of Joakim Noah. Although Rose was the face of the franchise since 2008, Noah was one of the most popular players among the Bulls fans. Noah was certainly one of the best defensive players in the league, while at his best age, which made him very popular among the Bulls fan base, which believed that benching Noah was disrespectful on Hoibergs side and many started to question his coaching abilities. 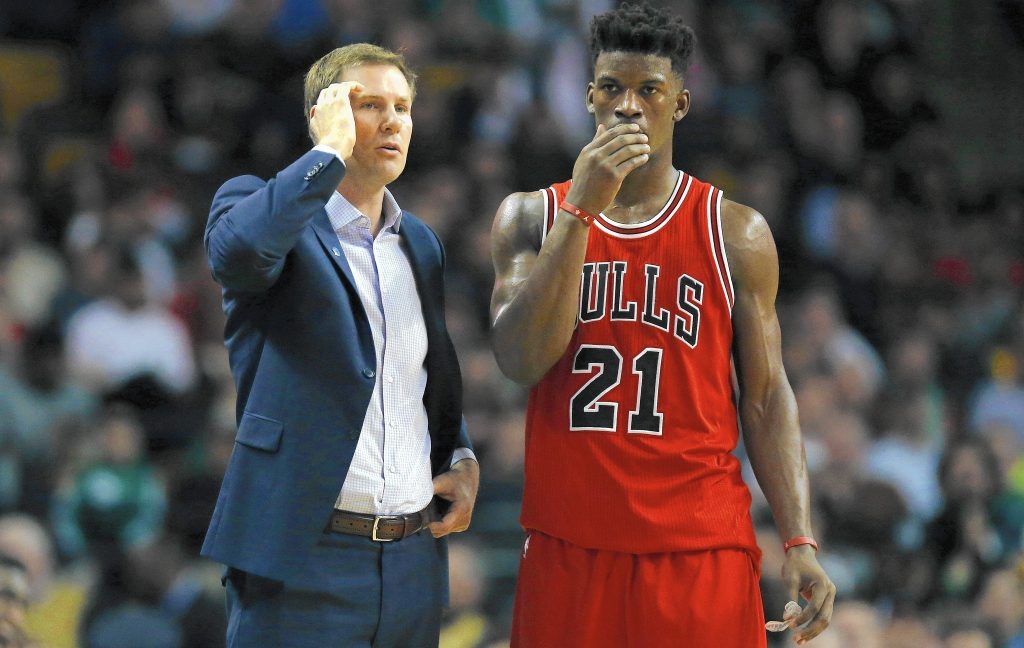 Jimmy Butler called out Hoiberg and said he was “TOO SOFT” !!!

Things like these only led to the disagreements between Hoiberg and the players. The best example that Hoiberg and the players were not on the same page was the case when Butler called him of being “TOO SOFT”.  After a very turbulent 2015/2016 season, the Bulls finished the regular season with a record of 42-40, which was enough only for the ninth place and the failure of reaching the playoffs.

However, Hoiberg now has a chance for redemption. A fresh start with a new team. Despite the opinion of many that this roster is destined for a disaster, Hoiberg hopes for a good outcome of the situation.
To maximize their chances for dominance on the court, the Bulls will have to create the majority of attacks through transition offense against unsettled defense, which, in essence, is one of the principles of Hoibergs offense. Nevertheless, last season it was clear that the team did not have the players which would put the coach’s vision into action. Rejuvenation of the team and acquisitions of more athletic players were identified as a major goal during the summer break. However, a week after the opening of the trade season, the Bulls signed two players on the wrong side of the thirties (Rondo and Wade) and a 28 year-old Robin Lopez.

Even though the Bulls management did not stick to the original plan of signing a young core of players around Butler, the acquisitions of Rondo – Wade- Lopez could, in some crazy imaginations, turn out to be a very successful for the Bulls. Rondo is definitely one of those players that sees some different passing angles that a very few PGs do, while Wade has put the opposing defense in trouble with his off-ball movements. The one thing Robin Lopez is among the best in the league is his ability to set perfect picks. This means that the Bulls fans could see a lot of ball movement and cuts to the basket. In order to space the floor, the Bulls will rely on a good form of Nikola Mirotic, Doug McDermott and Denzel Valentine (if he managed to carry over his shooting percentages from his college days to the NBA). If they manage to stay healthy, the Bulls could reach the 8th spot and make the play-offs, but their maximum is the first round.

After all has been said, the Bulls could end up being interesting to follow next season, even though the odds of them being as good as they hope, are VERY SLIM.