The Cleveland Cavaliers Are In Serious Trouble—And Golden State Has Yet To Bring It’s “A” Game! 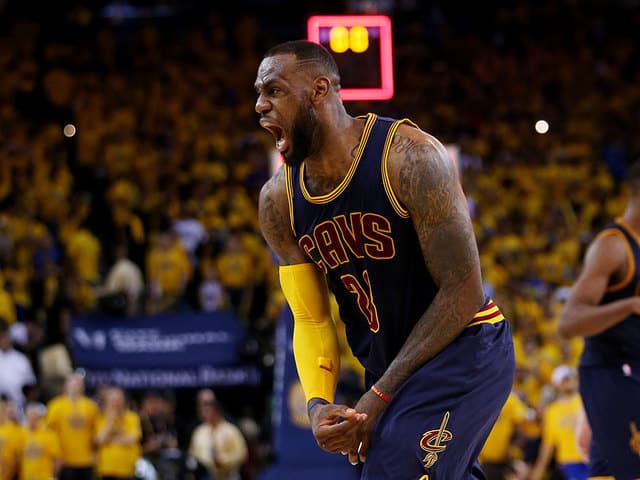 NBA fans hoped that the Golden State Warriors and Cleveland Cavaliers would make it back to the NBA Finals this season. After watching the Cavs give the Warriors a decent fight last season with only LeBron James in the lineup, the hope was that with Kyrie Irving and Kevin Love healthy it would be a more competitive series.

So much for that.

Kevin Love was injured in Game Two and may have to sit out Game Three as he goes through the league’s concussion protocol. Irving, who does not bring much of a defensive presence when he is on the court, has only made 12 of 36 shots in two games for 36 points (11-12 from the free throw line).

So far having Irving and Love hasn’t mattered much to the James, but now that his back is against the wall can the Cavs make the necessary changes and pull out an epic comeback?

Not likely. It isn’t that the Cavs are not a talented team incapable of winning, but they aren’t as talented as the Warriors who have yet to play their best game.

Neither Steph Curry or Klay Thompson have had a big game yet. Neither played well in Game One. While they looked decent in Game Two, they both took a back seat to Draymond Green. Curry, due to foul trouble and because he wasn’t needed, ended up playing only 24 minutes.

The Warriors bench and role players have done a tremendous job so far. In Game One, the bench scored 45 points behind a 20-point performance by Shawn Livingstone; in Game Two they chipped in 40 points.

Andre Iguodala defended James for 17 plays Sunday and held him to one basket on only three shots and forced seven turnovers.

Andrew Bogut has only played 15 minutes in each game, but his ten points in Game One were vital and his five blocks in Game Two even more so.

Golden State had nine turnovers in Game One, but 20 in Game Two. You don’t win too many games with 20 turnovers (unless your opponent is also a turnover machine; Cleveland is averaging 16/game).

Should the Warriors limit their turnovers, continue getting solid play off the bench and from role players, and get Steph Curry and Klay Thompson to wake up, these games could get ugly real fast.

Since Cavs head coach Tyron Lue does not seem to think his team needs to do much—if anything—different it is only a matter of time before it happens. Lue had this to say to the media about James’ problems with Iguodala:

“I think it’s random because they switch a lot of things, and they switch it 1 through 5, so a lot of guys end up on him. And Iguodala played 35 minutes last game, so of course he’s going to be on the floor. But as far as the one-on-one, I don’t see him having a problem with Iguodala.”

Really Ty? LeBron isn’t scoring on him. Isn’t that a problem?

When the end of the season rolls around fans hope to see the best two teams fighting for supremacy, but if the best two don’t make it they hope the best does—and they win it all.

The games do not appear like they are going to be as competitive as we expected, but at least it seems that the best team in the league is going to win the title.