The Denver Broncos Might As Well Start Paxton Lynch 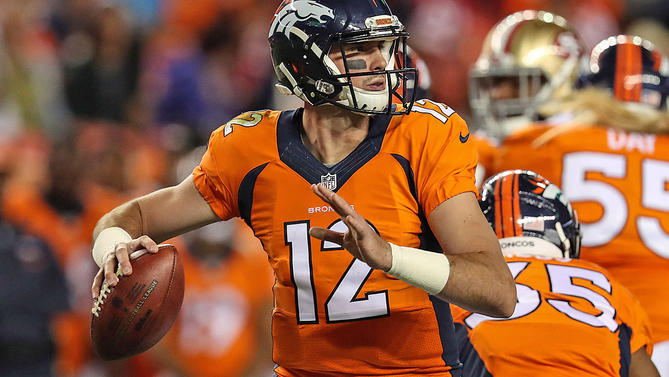 The Denver Broncos are in a lousy position. They hoped to have a well-groomed Brock Osweiler take over at quarterback this year, but the Houston Texans were willing to pay more than they were so Brock left. John Elway looked into Colin Kaepernick but wasn’t willing to take on his contract. So, perhaps with the strength of his defense in mind, he acquired Mark Sanchez. What you get with Sanchez is clear. He can play, but he is turnover prone and doesn’t recover well from mistakes during games.

They had one guy on the roster already, 2015 seventh-round pick Trevor Siemian who has yet to play in a regular season game, and then drafted Memphis quarterback Paxton Lynch in the first round this year.

Lynch is clearly intended to be the man of the future, but who is going to play this year?

According to media reports, it quickly began to appear as if the team might be in an enviable position. Rather than be stuck with one quarterback, they would have at least two (Sanchez and Siemian) to choose from and maybe three depending on how well Lynch develops. But as the saying goes, if you have two (or three) quarterbacks, you don’t have one since one has yet to prove he is better than the other(s).

Broncos head coach Gary Kubiak probably hoped his quarterback situation would sort itself out during the preseason, but instead it has become a little muddier. Sanchez has proven to be everything he was in New York and Philadelphia–good, but turnover prone and incapable learning from his mistakes. Siemian has potential but looks more like a guy that could be ready to go in another year or two–which is why Kubiak should just go with Lynch.

He has had his struggles during the team’s two preseason games, but he has appeared to learn from them and get better–unlike Sanchez. Siemian has done okay, but has just as much to learn as Lynch, and his upside is not as significant as Lynch’s.

As a first round pick, the expectation is that Lynch will play sooner rather than later. So if the team is going to sit him, it needs to be for someone who is clearly better than he is.

When Kubiak named Sanchez and Siemian the co-starters over Lynch, it wasn’t because either of them had necessarily looked better. They just had more knowledge and experience in the NFL game. While there is something to be said about experience (which Sanchez has) and familiarity with the system (which Siemian has), Lynch can get both simply by playing.

Kubiak has started to talk like he may consider giving Lynch the starting nod in Week One. Heading into the third preseason game the contest is still wide open, but now he has stated Lynch is just as much in the mix as the other two:

“I’m going to play the guy that I think is best for our team,” Kubiak said (PFT). “We have three guys out there battling. Obviously [Lynch] is a young kid. He did some really good stuff tonight. He made some mistakes, too. I think I’ve continued to tell you guys that he is behind the others from a knowledge standpoint as far as running the group. Obviously, we need to keep coming, keep bringing him along. We’re going to keep working here, find the guy that we think is best for our football team and go from there.”

Kubiak might as well give Lynch a chance to start this week. If he flourishes, he gets the job. If Lynch doesn’t, Kubiak might as well roll the dice with Siemian. With Sanchez, he knows what he is going to get–and it isn’t pretty which makes the unknown Siemian the lesser of two evils.