The Legend Of Tim Tebow Continues To Grow After Delta Flight 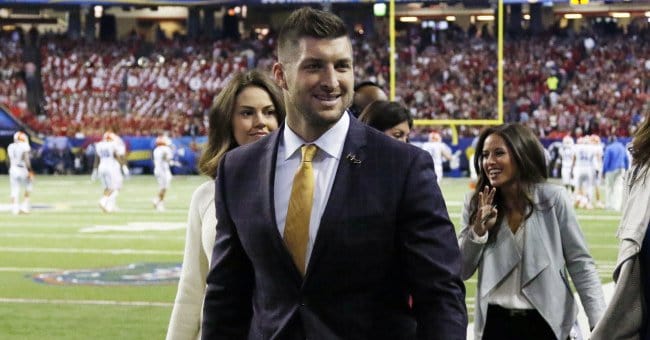 Tim Tebow may be the kind of guy you don’t want leading the offense of your favorite football team, but it is easy to say most coaches, fans, and parents, in general, would be more than happy if their daughters were to bring him home.

Mom would be a little envious and would probably do whatever she could to encourage him to take his shirt off. Dad—well, dad would be able to sleep at night knowing that his daughter was with a gentleman that would always treat her with the utmost respect.

How else can you describe someone that throws a prom for teenagers with special needs, builds a hospital in the Philippines, reads to children, and raises money for a whole host of causes?

His charitable acts and kindness have become the thing of legend; a role model that more successful athletes should look up to—which has now grown even bigger.

Tebow was among a group of passengers on a recent Delta flight from Atlanta to Phoenix that came to the aid of a gentleman having heart problems and his family.

To be fair, he wasn’t the only one that came to the assistance of the man and his family. According to a Facebook post made by one of the passengers, Richard V. Gotti, several people came to the man’s aid:

I watched strangers from all over the world, and every ethnicity come to the help of this man for over an hour! Whether it was chest compressions, starting an IV, helping breathe life into this man, or praying everyone helped! I listened to shock after shock from the AED machine and still no pulse. No one gave up. I observed people praying and lifting this man up to the Lord in a way that I’ve never seen before.

The post went on to commend the flight crew before talking about Tebow:

Then all of a sudden, I observed a guy walking down the aisle. That guy was Tim Tebow. He met with the family as they cried on his shoulder! I watched Tim pray with the entire section of the plane for this man. He made a stand for God in a difficult situation. The plane landed in Phoenix, and that was the first time they got a pulse back!

Another passenger said Tebow made sure the woman made it to the hospital her husband was taken to once the plane landed.

Some people have commented on social media about how Tebow didn’t do anything to help save the man. He didn’t provide medical care of any kind and didn’t deserve the praise he is getting for this—but those people were all shot down by others talking about the power of prayer.

Whether you believe in the power of prayer or not, Tebow did something of great value. He helped provide comfort to the man’s wife when the worst thing she could ever imagine happening was possibly going to happen.

Ask her about Tebow and she would probably sing his praise for days.

In typical Tebow fashion, he has said nothing about the flight on social media or to reporters.

Just another day in the life of your humble superstar.