We all knew it was going to happen. It was just a matter of when. When Russell Westbrook tied Oscar Robertson’s triple double record with his 41st one last week, there was no doubt that he would record at least one more in the team’s last five regular season games.

It was a little surprising when it took him three tries to get it, but he still got it—and he did it in style with 50 points, 16 rebounds, and 10 assists against the Denver Nuggets Sunday afternoon. 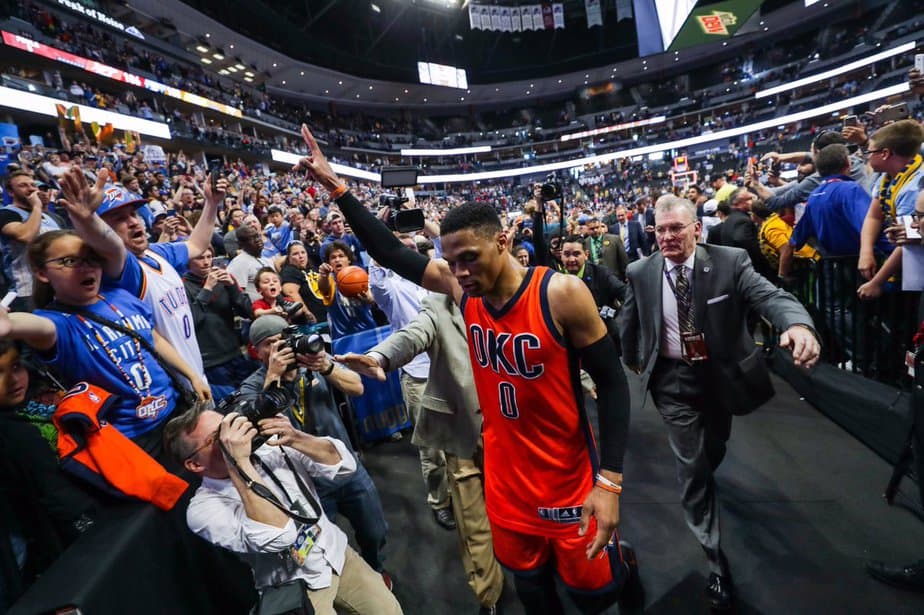 “Very, very blessed. I’ve got to give all the thanks from the man above,” Westbrook said. “He’s blessed me with unbelievable talent to go out and compete at a high level. I’m just thankful for my teammates, for my coaching staff, for the organization, for all the fans, for my family for believing in me and allowing me to do what I’m doing.”

By halftime he was well on his way with 23 points, 12 rebounds, and six assists. It took him a little while to get his tenth assist. But it finally came late in the fourth quarter when he found Semaj Christon in the right corner with 4:17 left for three.

The crowd in Denver appreciated the accomplishment and showed Westbrook some love even though the shot cut their team’s lead to just 10 points with plenty of time for a comeback to be completed. Should the Thunder complete the comeback, their team would be eliminated from playoff contention.

Sure enough—after Westbrook recorded assist No. 10, the Thunder went on a 15-4 run to end the game. The final and most important shot—the game-winning 36-foot, buzzer-beating three-pointer—came from Russell Westbrook (who, incidentally, scored all 15 points).

Westbrook’s three-pointer made the final score 106-105 and officially eliminated Denver from the postseason.

When asked about that shot, Westbrook had this to say (ESPN):

“It was pure adrenaline, emotions running high, game-winning shot. It’s something you dream about as a little kid to be able to do that on the road, especially from that distance. It’s something that you’ll definitely never forget.” 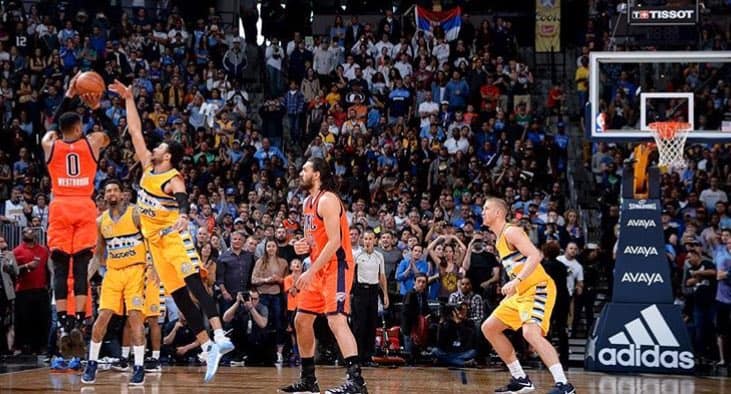 The game will probably win over a few more MVP votes for him. His team may not have one of the better records among playoff-bound teams, but he did set a rather incredible record in spectacular fashion. It started with the first 50+ point triple double in over four decades back on October 26. It’s only fitting that the record is also set with a 50-point triple double.

James Harden beat him to the punch by becoming the first player to have multiple 50+ point triple doubles in a season back in late January (2). But Westbrook became the first with three.

It will be interesting to see if the Thunder and Westbrook let off the gas these last two games with a tough opening round series against the Houston Rockets coming up. Houston won the season series between the two, four to one. Westbrook had triple-doubles in two of them—both losses.