Every team hopes to be running on all cylinder by time the regular season starts, but for many it just doesn’t happen. There are simply too many moving parts to evaluate, and some can’t be assessed until they actually start to play (preseason doesn’t count).

Flawed or not, teams have to play on when the whistle says it’s game time. If it still doesn’t work, you have to figure out how to live without it. 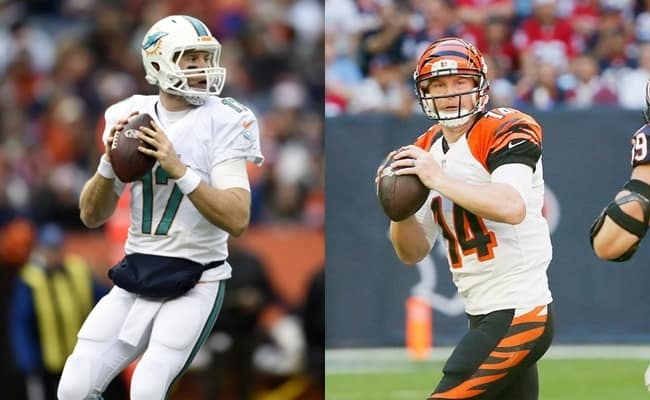 Both of the teams playing on Thursday night have had trouble running the ball this season. Miami was hoping Arian Foster would help them develop a running game, but instead they are learning why the Texans were so willing to let him go. They have yet to see a running back gain more than 38 yards in a game. As a team they are averaging a pathetic 82 yards a game (No. 27; and that’s only because they rushed for 115 against a poor Browns defense).

Cincinnati still has its dynamic duo of Jeremy Hill and Giovanni Bernard, but neither have been able to do much. That is, with the exception of Sunday’s game against the Denver Broncos where Jeremy Hill had a 97 yard, two-touchdown day—which also happened to nearly double his season total from the first two games (31 and 22).

We here coaches talk all the time about finding balance in the offense, but when do you stop trying? When do you just say “Screw it!” and do the one thing you do well and throw in the towel on the other thing?

Whichever team can answer that question Thursday night will likely end up winning the game. Both teams have good passing games led by capable quarterbacks with playmaking receivers. Neither team has a bad pass defense, but one would be hard pressed to call either good.

It appears like the Bengals have a small advantage here. Andy Dalton leads the AFC’s top passing offense with 312.7 yards a game, but only has a pair of touchdowns to go with two interceptions on the season. His top target, A.J. Green, is third in the conference in receiving yards with 295 yards (22 receptions; one touchdown).

Miami’s pass defense comes in at No. 18 in the league allowing 267.7 yards a game. However, they are tied for seventh in sacks with nine and will likely tack on a few more against the Bengals offensive line. Cincinnati’s big men have allowed a league-high 12 sacks.

As maligned as the Miami offense has been this season, Ryan Tannehill is doing a pretty good job throwing the ball. Not as good as Dalton, but he isn’t doing half bad (297.3 yards/game; third best in AFC). Like Dalton, he has one target he has connected with especially well, Jarvis Landry (AFC-leading 24 receptions and 314 yards).

Miami’s offensive line appears to be a little bit better at protecting Tannehill. He’s only been sacked six times so far this season. But the credit may belong more to Tannehill for getting rid of the ball (he’s been hit 20 times).

With Arian Foster injured and no one on the roster appearing to be a capable NFL-caliber running back, the Dolphins might as well plan on slinging the ball 45 times. If they have to run, they should do most of it in the first half. Tannehill has been terrible in first halves (58.5 rating) but pretty darn good in second halves (114.9 rating) (NFL).

So if they can keep it close in the first half, the offense may be able to pull it out in the second half.

Cincinnati has a tougher time figuring out what approach to take. They have been a ground and pound team in recent seasons and could do so against the Dolphins 31st ranked run defense. However, the problem they will fall into if they go that route is playing right into Miami’s hands.

If they run the ball a lot, they will control the clock and keep the Dolphins offense off the field, but the running game tends to be slow. If they don’t get enough of a lead, the Dolphins could be within reach in the second half (which is exactly what they want).

At the same time, they have the AFC’s best passing offense, so why not use it? Because if they do, they put the ball back in Tannehill’s hands who will then be tasked with responding quickly—which the Dolphins offense can do.

So if you like a shootout, give the game a try Thursday night. Chances are you will not be disappointed.