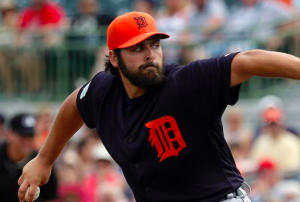 The Detroit Tigers appear to have come up with a plan for rookie pitcher Michael Fulmer, and somewhat surprisingly, it doesn’t involve skipping any of his remaining starts. Detroit manager Brad Ausmus outlined the plan for Fulmer following Tuesday’s loss to the Minnesota Twins. The plan will include Fulmer making at least three more starts during the regular season, and possibly making him available to pitch the wild card playoff if the Tigers reach that point in the season.

Fulmer, who was acquired from the New York Mets in the trade involving Yoenis Cespedes last summer, has emerged as one of the best young pitchers in the game this year and a frontrunner for American League Rookie of the Year. However, the Tigers have been concerned with his innings count, not wanting to push him too far past the 124.2 innings he threw in 2015. Fulmer is already at 159 innings this season.

Ausmus says that Fulmer will not have his turn in the rotation skipped at any point the rest of the season, but that the team will look to get him extra rest. For instance, Fulmer last pitched on Friday, throwing seven innings against the Baltimore Orioles, and he will not start again until either Friday or Saturday this weekend, giving him at least a full week in between starts.

The Tigers are currently utilizing a six-man rotation, although they have elected to have Jordan Zimmermann throw a simulated game this week instead of getting another start following a disastrous outing in his return from the DL over the weekend. With six available starters and a couple off days remaining on the schedule, the Tigers are confident they can get Fulmer adequate rest without taking him out of the rotation during this crucial time of year.

“I’ll pitch whenever they tell me to,” says Fulmer. “I’m not going to argue with [Ausmus].” Fulmer says he prefers to receive a couple days of extra rest rather than having his turn skipped. “It all depends on how I’m pitching and how I’m feeling. Right now I’m feeling great and hopefully that continues.”

The two teams have a four-game series the final week of the season, giving the Tigers another chance to make up ground quickly, especially if Ausmus can manipulate the rotation in a way allows both Verlander and Fulmer to pitch in that series as well. Detroit currently trails Cleveland by six games, making the wild card a more realistic goal for the Tigers.

Detroit currently trails both the Toronto Blue Jays and Baltimore Orioles by two games in the wild card race. If Detroit reaches the one-game wild card playoff, it’s possible that either Verlander or Fulmer could be in line to start that game. Whether the Tigers would feel comfortable pitching Fulmer beyond that remains to be seen, but the fact that Fulmer won’t be skipped the rest of the season is good news for Detroit’s postseason hopes, as well as his Rookie of the Year candidacy.