Haley’s Comet only comes around once every 75-76 years. Sea turtles, once they reach sexual maturity, will mate and lay their eggs every two to four years. The Queen of the Night (a flower) blooms for only one night every year. Birds fly south for the winter and a new season of Game of Thrones only comes out once a year.

Then there are events that are truly rare—like the New England Patriots being the underdog at home. The last time was in Week 12 of the 2013 season. Before that, it was Week Nine of the 2005 season—and now it will happen this Thursday when the Houston Texans come to town (-1.5 points). 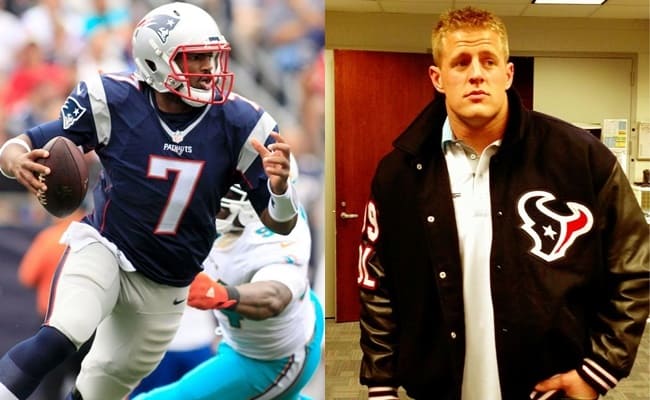 Yes, the Houston Texans—the same team that got letterman jackets the last time they traveled to Foxboro during the regular season in 2012.

Fans will likely not see the Texans break out the letter jackets again. While the team seemed to think it was a very good idea, the internet had a blast poking fun at them. Tack on the whipping the Texans took that night (14-42) and the letter jackets don’t exactly bring up good memories.

Patriots fans would love for there to be a similar outcome this week, but it doesn’t look good for them. It is looking like they may be forced to start rookie Jacoby Brissett at quarterback. With Tom Brady suspended, Jimmy Garoppolo has been starting, but after spraining the AC joint in his shoulder Sunday, he is not expected to be ready to play on Thursday.

Rumor has it that the Patriots are trying to pressure Garoppolo into playing—because Tom Brady has played through a similar injury several times (if Tom Brady can do it…). Okay, but did Brady have trouble lifting his arm like Garoppolo (RealGM)?

More than likely, it will be the rookie (Brissett) from North Carolina State behind center for the Patriots Thursday night—but fans will probably not know that for certain till Thursday. In typical Bill Belichick fashion, he is not saying what the plan is yet, and got annoyed when the press kept asking him about it Tuesday (ESPN):

“I’m a football coach; I’m not a doctor. The medical staff is the medical staff. I coach the team; the medical people handle the injuries. They don’t call plays. I don’t do surgeries. We have a great deal there. It works out good.”

“Let me put it a different way — I’m the coach, I do what’s best for the football team. I don’t know why we can’t understand that.”

Should Brissett be the one, the Texans will be doing everything they can to stop the run and force Brissett to beat them with his arm. Belichick didn’t ask him to pass much against the Dolphins, but he did a pretty decent job when he did (6-9, 92 yards, one touchdown).

While the Dolphins are not a terrible defense (No. 26 in yards per game allowed; No. 12 in points/game allowed) they did manage to keep the Brissett-led Patriots to just seven points in the second half.

Houston’s defense, however, is in a whole different class than the Dolphins unit. They finished last season as the No. 3 defense in the league and have picked up where they left off this season (No. 3 points/game allowed and yards/game allowed).

The Texans should be able to handle the Brissett-led Patriots offense with relative ease, but the big question will be whether they will be able to move the ball against the Patriots defense. Brock Osweiler does not appear to have the offense mastered yet, and has thrown at least one interception in each start. But if he can get on track with DeAndre Hopkins and Will Fuller early on, the Patriots could be in trouble.

If New England has a weakness, it is their pass defense (No. 27 in passing yards/game). However, if the Texans are going to exploit it and win, they will have to do something they struggled with against the Bears and Chiefs—finish off drives. Six times, so far, they have had to settle for field goals in the red zone. Houston has only scored one touchdown inside the red zone.

Fail to finish off drives with touchdowns Thursday night, and the Texans will be daring the Patriots to beat them.