For a change, there appeared to be a reason for fans of the New England Patriots to be a little worried about their team Thursday night. They were starting a rookie quarterback for the first time in franchise history; a third stringer! They were playing a very tough defense, and the quarterback of the offense was the guy who led his team to an incredible win over them last year. 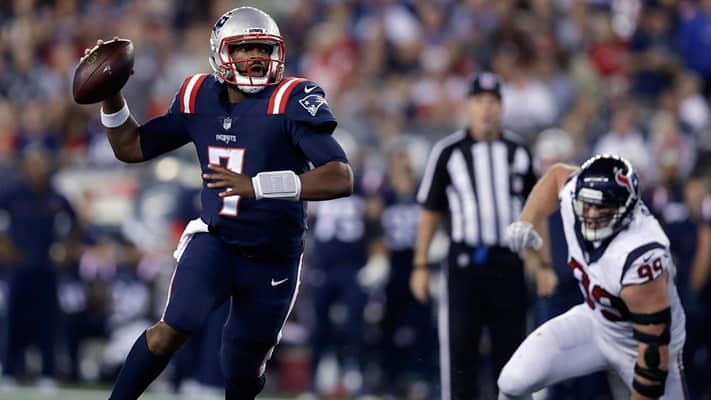 Two of the things they do well is play defense and take advantage of their opponent’s mistakes—which you can’t make and expect to beat the Patriots. Houston certainly made plenty of them, and New England took advantage of every one.

The first came in the first quarter when the Houston return man fumbled the ball, which the Patriots recovered on the 22-yard line. A false start pushed the ball back to the 27, and a play later, Jacoby Brissett made the longest touchdown run by a New England Patriots quarterback since Steve Grogan’s 41-yard run in 1976 (ESPN).

A 10-0 deficit isn’t too bad. Teams have made comebacks from down 10-points before—but not if they keep screwing up.

But the Texans kept doing just that in the second half. Down 13-0 after holding the Patriots to a field goal on their opening drive of the half, Houston needed to respond on their first drive but instead fumbled the ball—again—which New England recovered.

One play later, LeGarrette Blount trots in for a one-yard touchdown run to give the Patriots a 20-0 lead.

The defense did their job on New England’s next two possessions, but with no help from the offense they were back on the field quickly each time. When LeGarrette Blount scampered down the sideline for a 41-yard touchdown with 11 minutes to go in the fourth, the defense looked whipped.

The touchdown made the final score New England 27 and Houston 0.

The Texans gained more yards than New England, but thanks to turnovers, the Patriots rarely had far to go in order to score (two touchdowns were set up by fumbles). Brock Osweiler was off-target for most of the night, and in the second half appeared to check down to safe but short passes.

After a couple of first downs, the Patriots defense would buckle down and stop any attempt at a drive by the Texans.

New England didn’t ask Jacoby Brissett to do much, and he did what was asked of him very well. Most of his passes were short, safe ones designed to allow the receiver to do most of the work. He ended the night with 11 completions on 19 attempts for 103 yards and added another 48 yards and a touchdown on eight carries.

Houston will have an easier opponent up next when the Tennessee Titans come to town. They will need to get the kinks worked out of their offense against them. Following the Titans, they have games against the Vikings, Colts, and Broncos.

With how the Patriots looked, it doesn’t matter who they line up at quarterback. They should have no trouble beating the Buffalo Bills next week.