Posted on September 19, 2016 by Bryan Zarpentine 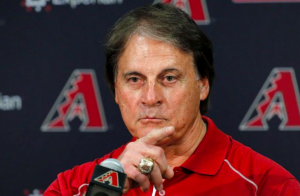 Tony La Russa, who is currently serving as the Chief Baseball Officer for the Arizona Diamondbacks, believes he may be removed from that role following the season. La Russa’s suspicion, which some may call fear, that he will be fired comes after the Diamondbacks announced on Sunday that they will not be brining back Senior Vice President of Baseball Operations De Jon Watson in 2017. Watson was primarily in charge of player development and amateur scouting.

La Russa was part of the decision-making progress with regard to the team not re-newing Watson’s contract for next year, and the fact that Watson will not be invited back may not bode well for the future of La Russa or Arizona GM Dave Stewart. Watson, La Russa, and Stewart have all faced great criticism and received a bulk of the blame for Arizona’s struggles this season, and Watson not returning leaves the door open for La Russa and Stewart to be fired as well.

“If it gets turned over the next person, you gladly turn it over,” La Russa said Sunday about the team’s struggles this season. “When we’re 20 games under .500, I felt if you’re looking at the front office, the most responsible person, it would be me.” As of Monday, Arizona is 63-86 and just one game ahead of the last place San Diego Padres in the NL West.

La Russa says he has not yet had a meeting with Diamondbacks owner Ken Kendrick and team president and CEO Derrick Hall to discuss his future with the organization. However, he does expect to have a meeting with them late in the season or once the season ends.

“When you have this kind of year, I’ve never had a problem taking responsibility, and evidently, stuff that I’ve been taught hasn’t contributed enough,” La Russa said. “We’ll wait and see how the decision comes. I’m ready to go forward if they’ve seen enough.”

From a baseball perspective, the Diamondbacks went all-in on the 2016 season, only to fall flat on their face. Arizona made several high-profile moves this offseason, most notably signing Zack Greinke to a massive contract and trading away several promising young players to acquire Shelby Miller from the Atlanta Braves. Greinke has had a fine season, but not necessarily one that matches his salary, while Miller has been an utter disaster, being demoted to the minor leagues earlier this year.

Meanwhile, Ender Inciarte and Dansby Swanson, two of the players the Diamondbacks traded to the Braves for Miller, are both coming on strong late in the season and appear to be significant pieces in Atlanta’s rebuilding efforts and the team’s future. That trade alone has drawn great ire towards the Arizona front office.

The way La Russa addressed the media on Sunday, it’s almost as if he expects to be fired and believes the club would be justified in letting both him and Stewart go. The Diamondbacks clearly have a lot of rebuilding to do, but are not in great shape to do so after the contract given to Greinke and the prospects given up to get Miller. Despite some bad luck, La Russa and Stewart are the ones most responsible for getting the Diamondbacks in this mess, and La Russa appears doubtful that he and Stewart will be given the opportunity to clean it up.