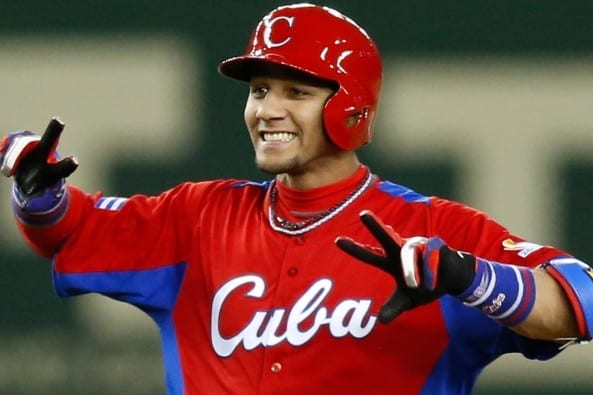 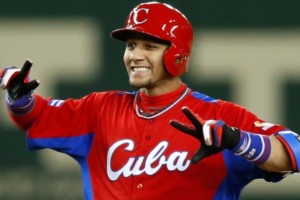 Yulieski Gurriel, one of the top players in Cuban baseball, has officially been declared a free agent by Major League Baseball. The 32-year old third baseman is now free to sign with any major league team.

Many scouts consider Gurriel to be the top player on the international market this summer. He is considered major league ready and an offensive force who is also an above-average defensive player at the hot corner. Gurriel defected from Cuba in February, as did his younger brother, Lourdes Gourriel Jr., who is 22.

Due to his age, Yulieski Gurriel will not be subject to international spending limits, while Lourdes Gourriel Jr. will be subject to those limits unless he waits until his 23rd birthday to sign. However, as of right now, Lourdes has not been declared a free agent. With Yulieski being eligible to sign before his brother, it decreases the likelihood that the brothers will attempt to sign with the same team as part of a package deal.

The older Gurriel was first noticed by American scouts during the 2006 World Baseball Classic. He was also part of Cuba’s Olympic Gold Medal winning team in 2004 and their Silver Medal team in 2008. He also participated in the 2009 World Baseball Classic. Gurriel has played parts of 14 seasons as a professional in both Cuba and Japan, hitting .335 with 250 home runs and over 1,000 RBIs.

His age makes it unlikely that he will receive a long-term contract, but receiving a contract with an annual average income in the range of $10 to $12 million seems like a realistic possibility for Gurriel. The Los Angeles Dodgers have reportedly expressed interest in signing him. There were also reports last week indicating that Gurriel was interested in joining the New York Yankees. Alex Rodriguez is reportedly Gurriel’s favorite player. He has also communicated with Yankee closer Aroldis Chapman, another Cuban player who defected so he could sign with a major league team.

Gurriel is primarily a third baseman, although he has played shortstop and second base in the past and scouts believe his skill set could play at either second base or third base. His age may deter some teams from pursuing him, but the fact that he has above-average power, is strong defensively, and will require little time in the minors before stepping onto a big league field will make him an attractive possibility for several major league teams.