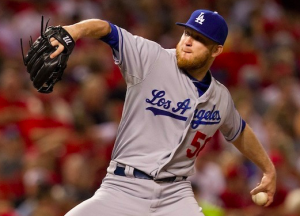 The Toronto Blue Jays have agreed to sign left-handed reliever J.P. Howell. The deal is still pending a physical, but multiple outlets reported Tuesday night that Howell and the Blue Jays had agreed to a one-year deal worth $3 million. The signing of Howell will be the first addition the Blue Jays have made to their bullpen this offseason aside from pitchers brought in on minor league contracts.

From 2008 to 2015, Howell was one of the best left-handed relievers in baseball, outside of a rough 2011 season. Unfortunately for Howell, he had another down season in 2016 heading into free agency. Last year with the Dodgers, Howell posted a 4.09 ERA, with opposing hitters batting .281 against him, his highest total since 2007. As a result, the Dodgers left Howell off their postseason roster.

Based on his track record, the soon-to-be 34-year old would appear capable of having a bounce back year, as he’s just a year removed from going 6-1 with a 1.43 ERA in 2015. After signing with the Blue Jays on a one-year deal, Howell should be motivated to have a strong season, knowing he’ll be back on the free agent market next offseason.

As for the Blue Jays, they’ve been in the market for a left-handed reliever ever since losing Brett Cecil, who signed a four-year deal with the St. Louis Cardinals early in the offseason. Toronto has been connected to many of the other lefty relievers on the market, most notably Jerry Blevins, Boone Logan, and Travis Wood. However, Wood is holding out for a chance to be a starter, while Blevins and Logan will likely require multi-year commitments.

By signing Howell, the Blue Jays are settling for a player at the lower end of the market. Of course, despite coming off a down season, Howell has a more impressive track record than most of the other lefties on the market, and as noted, he’s a good bounce-back candidate. Middle relievers rarely come with a guarantee, but signing Howell gives the Blue Jays a chance to add a competent left-handed reliever without spending a lot or making a long-term commitment.

Aside from Howell, the Blue Jays have a trio of lefties in their bullpen in Aaron Loup, Matt Dermody, and Chad Girodo, although the latter two have thrown fewer than 15 big league innings combined. Meanwhile, Loup has struggled the past two seasons after being far more effective earlier in his career. Unless Loup can bounce back or one of the other lefties can emerge, Howell figures to be one of the most important figures in Toronto’s bullpen this season.

The Blue Jays do have a high-level closer in Robert Osuna, but the depth behind him isn’t quite as solid as they would like. The Blue Jays are hoping that Joe Biagini can repeat the strong performance he had as a rookie last season, although obviously there’s no guarantee that’s the case. Toronto is also counting on 40-year old Jason Grilli to continue to be a reliable late-game reliever. With some level of uncertainty in Toronto’s bullpen in front of Osuna, Howell figures to be an important 7th and 8th inning setup man for the Blue Jays in 2017