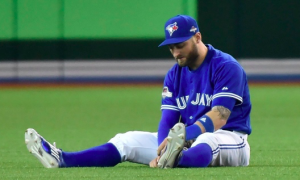 It’s hard to envision a team that’s been to the ALCS in each of the last two seasons starting a season 1-9, but that’s exactly what’s happened to the Toronto Blue Jays in 2017. While every other team in baseball has at least three wins, and every other team in the AL East is .500 or better, the lowly Blue Jays won just once in their first 10 games. But despite the giant hole the Blue Jays have dug for themselves early in 2017, there is no panic from the front office and no indication that major changes are on the horizon.

If there’s a silver lining for the Blue Jays, it may be that they know exactly what has gone wrong during the first 10 games of the season, and it’s an area where the club knows improvement is likely. Heading into Saturday, the Blue Jays have scored the fewest runs in the majors, as nearly everyone in their lineup as started the season in a slump. The lone exception has been third baseman Josh Donaldson, who was forced to the DL on Friday with a calf injury, making matters worse for the struggling Jays.

However, Toronto’s front office is confident that it’s just a matter of time until this typically potent lineup gets itself turned around with the likes of Jose Bautista, Troy Tulowitzki, Russell Martin, and Kendrys Morales.

“When it goes collectively as badly as it does right now with our offense,” explains Blue Jays President of Baseball Operations Mark Shapiro. “A lot of what we’re dealing with is we need to get to a point where guys stop trying to do too much and stop trying to take responsibility for it individually. It’s going to have to be a collective approach where as a team we start having better at-bats, getting on-base and finding ways to score.”

Shapiro also remarks that despite the poor record, the Blue Jays are doing some things right, creating hope that they can get things turned around. Toronto’s pitching has been solid, particularly in the bullpen, as Joe Biagini, Joe Smith, and Ryan Tepera are all off to bright starts, even though the team has had little reason to use closer Roberto Osuna.

“We’re pitching well, dominant at times, there are a lot of good things going on both in the rotation and in our bullpen and we’re playing good defense,” says Shapiro. “If we’re patient, and we really don’t have any choice but right now, I feel like we’ll be rewarded.”

With such a veteran-filled team, Toronto’s window to chase a World Series is right now, and so if there is a problem with the team, there may be pressure on the front office to fix that problem before it’s too late. However, Shapiro says the Blue Jays aren’t going to over-react when it comes to evaluating players this early in the season, knowing that nearly every hitter in their lineup has a track record far better than what they’ve produced thus far.

“When it comes to evaluation, you fight not to evaluate because everything gets accentuated at the start of a season,” says Shapiro. “This is not the time to start looking at external help. There may be a time and a place when you start to think about that, but you’re not going to replace five hitters.”

Right now, the Blue Jays don’t exactly have a lot of high-end prospects knocking on the door of the big leagues, so they would have to go outside the organization to find any help. Of course, Shapiro is right when he says that the players currently in Toronto’s every-day lineup are capable of getting things turned around and being one of the more potent lineups in baseball.

That being said, a start like the one the Blue Jays have experienced this season can bury a team for the rest of the year, especially in a competitive division like the AL East. Toronto can’t afford to wait much longer before the wins start coming or the Blue Jays may find their window start to close. Perhaps the panic button should be a little closer than the Blue Jays believe it to be right now?