Travis d’Arnaud Working Towards Bounce Back Year in 2017 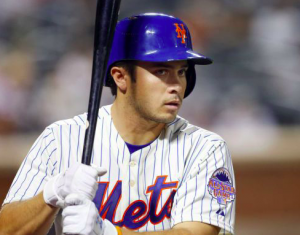 Despite not everything going according to plan in 2016, the New York Mets still found a way to earn a wild card spot and return to the postseason after reaching the World Series in 2015. If the Mets hope to get back to the World Series in 2017, one area where they’ll need to improve is behind the plate. Starting catcher Travis d’Arnaud is coming off a hugely disappointing campaign in 2016, but he’s been working hard this offseason to help ensure that he’s able to turn things around this year in what appears to be a make or break season for him.

A year ago, d’Arnaud had immense struggles both offensively and defensively. He hit .247 with just 11 extra-base hits and 15 RBIs in 75 games, a dreadful follow up to the 2015 season when he hit 27 extra-base hits and posted an .825 OPS, despite playing just 67 games due to injury. Defensively, d’Arnaud had all kinds of trouble controlling the running game, throwing out just 22% of attempted base stealers.

Part of d’Arnaud’s problem last season was the lack of a true catching instructor, something the Mets have rectified by bringing in Glenn Sherlock, who will be New York’s third base coach and catching instructor after spending the last 19 years with the Arizona Diamondbacks. Sherlock has worked with d’Arnaud over the winter, creating a sense of optimism in New York’s backstop.

“He was a huge help,” said d’Arnaud of Sherlock’s input this offseason. “For the team to bring him in shows they have my back and they want me to get better.” The two have looked at countless hours of video footage in search of ways d’Arnaud can improve behind the plate.

“It was great, a ton of work,” explains d’Arnaud. “Sometimes I rush throwing. He showed me a lot of videos where he said I was really, really quick, but in my mind it looked like I was slow. A lot of it is just slow it down and make a clean throw.”

At the same time, there is also pressure on d’Arnaud to turn things around offensively. He’s always had the potential to be an impact offensive player, but injuries have prevented him from staying in the lineup for long periods of time and finding his rhythm at the plate. He’s worked with Mets hitting coach Kevin Long this winter to help fix his swing, which got far too long last season, a far cry from the short and compact stroke that made him one of the top catching prospects in baseball just a few years ago.

“We wanted to eliminate the wrap. We watched a lot of film, too. A lot of the balls I hit well, I thought I was wrapping and I actually wasn’t wrapping. I know now where to start my hands to stay consistent,” says d’Arnaud.

With Matt Wieters still available on the free agent market, some fans have advocated the Mets making an effort to sign him and move on from d’Arnaud. But throughout the winter, the Mets have remained committed to d’Arnaud, and the fact that they made changes on their coaching staff to make room for Sherlock indicates a willingness to give him another chance to be their primary catcher in 2017.

The Mets still have Rene Rivera, who took over much of the catching duties from d’Arnaud late last season. Rivera figures to serve as d’Arnaud’s backup this season, providing a solid defensive backstop. New York also has Kevin Plawecki, an accomplished minor league hitter who has yet to take advantage of his opportunities to play in the majors.

But the Mets are still betting on the soon-to-be 28-year old d’Arnaud to find himself this year and finally fulfill his potential. The team has resisted opportunities to replace him and given him the coaching they believe he needs to succeed. If d’Arnaud can bounce back in 2017, he could be a difference maker that helps propel the Mets deep into October. But if not, it’s just one more thing the Mets will have to overcome on their way back to the postseason.