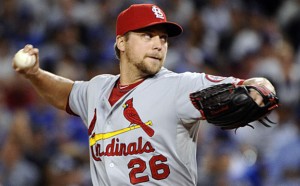 After Trevor Rosenthal gave up three runs without recording an out Friday night, his third blown save of the season, the St. Louis Cardinals announced on Saturday that Rosenthal would no longer be the team’s closer. Manager Mike Matheny told Rosenthal on Saturday that he would be used in a different role moving forward. Rosenthal has been the closer in St. Louis since late in the 2013 season. However, he currently owns a 5.63 ERA on the season, converting 14 of 17 save opportunities.

Rosenthal was largely dependable throughout April and May, but he has all kinds of trouble throughout the month of June, allowing 11 runs in seven innings of work. His control has been nothing short of dreadful for much of the season, as Rosenthal has issued 21 free passes in 24 innings of work this year, giving him an unacceptable WHIP of 2.04.

“We just need to figure out a way to get him right and figure out how to get him to the point of being the pitcher that he’s been the last few years,” Matheny told reporters Saturday. “Right now, the ninth inning is a tough ask to do that. We’ll continue to watch, but right now we’re going to wait and see if we can get him into some spots to get him in that good place.”

Matheny also said that Rosenthal was “disappointed” at being removed from his post. “”He wears it very personally that he’s not been able to do what he wants to do,” Matheny explained. “It stings. That’s such a volatile spot. You come in there, and you’re a hero or a goat. It’s one of the two. It’s never easy being that goat when you know he physically feels good and is not getting the results he wants. We have to tinker a little bit.”

With Rosenthal now out as the team’s closer, the Cardinals will look at three different players to help them close out games until they can decide on a permanent replacement. Seung Hwan Oh, Jonathan Broxton, and Kevin Siegrist will all get an opportunity to pitch late in games. Oh has over 350 career saves in Japan and Korea, as well as a 1.66 ERA in his first big league season. Broxton is a former all-star closer, but has no saves since 2014 and carries a modest 3.77 ERA this year. Siegrist has seven career saves, including one this year.

The Cardinals can only hope that one of their relievers can step up and solidify the closer’s spot for them, while at the same time getting Rosenthal straightened out so he can contribute later in the year. With a 10-game deficit in the NL Central and a crowded wild card race, the Cardinals don’t have a lot of margin for error, making a change in the closer’s role necessary at this point in the season.