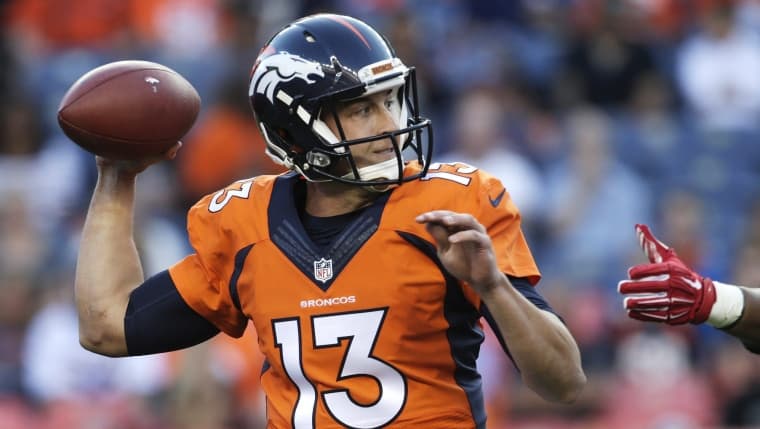 The quarterback drama is over (for now) in Denver. Head coach Gary Kubiak has decided that 2015 seventh round draft pick Trevor Siemian will start for the defending Super Bowl champions when they take on the Carolina Panthers in the 2016 season opener September 8.

Siemian has yet to throw a pass in a regular season game but did well enough with the snaps he took in the preseason and in practice to win the job over Mark Sanchez and Paxton Lynch. Kubiak said after Saturday’s preseason contest with the Los Angeles Rams that he had enough information to make his decision and wasted no time by making it public Monday morning.

After Saturday’s game, Kubiak sounded like he was happy with what he saw in Siemian:

“I’m impressed — I think he’s very calm,” Kubiak said. “I can tell by the way he handles the team in the huddle, he’s got control of what’s going on. Gets a bad break on the ‘go’ ball and comes right back and goes down the field. I think what I see is a guy getting better.”

What he sees in Siemian may be why he won the job over Sanchez.

So—what does Kubiak see in Siemian that Sanchez doesn’t have?

Siemian has been consistent and level headed. The offense has been unspectacular with Siemian at the helm, but with the defense, the Broncos have that could very well be all they need to have a shot at getting back to the Super Bowl.

That’s it. With Siemian, the Broncos feel like they know what they have, and they are okay with it. With Sanchez, you never know what you are going to get.

If there are two things Mark Sanchez has never been, it is consistent or level-headed. He has had moments of brilliance and has played well at times, but when he screws up—he really screws up. That was evident when he fumbled the ball on two consecutive drives against San Francisco.

Kubiak tried to give a chance to get back on track after the fumbles, but Sanchez looked like he has already mentally checked out of the game.

What will be interesting to see now is what the Broncos decide to do with Sanchez. Since the news broke that Siemian was named the starter, word has hit the internet that the Broncos are trying to trade Sanchez. Considering Sanchez’s history, it will be surprising if anyone bites—especially when they know the Broncos will be cutting him soon in order to save $3.5 million ($1 million of his $4.5 million salary was guaranteed).

If they are going to cut him, they will likely do so before their final preseason game. Should he play and gets injured they risk being on the hook for his entire $4.5 million salary (PFT). His salary becomes guaranteed if he is on the roster for Week One.

When Siemian takes the field September 8, he will end up making a little history. He will be the first quarterback from Northwestern to start in Week One since Otto Graham back in 1955 (NFL).

As for Lynch—yes, there is a lot of promise there and a world of potential, but for the time being the Broncos are happy going with Siemian.