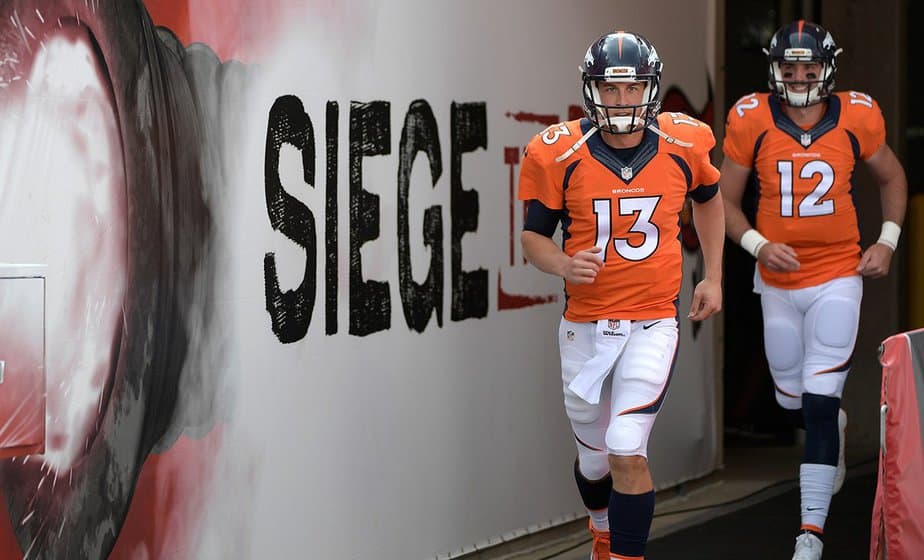 Trevor Siemian would probably love to be the quarterback of the future for the Denver Broncos. Who wouldn’t love to have guys like Demaryius Thomas and Emmanuel Sanders to throw, and a defense that can protect a lead like Denver’s can?

Siemian has to know that is probably not going to be the case. No matter how well he plays, no one spends a first-round pick on a quarterback only to give the job to a seventh rounder. Eventually, the Broncos are going to want to Paxton Lynch to take over. But for now, after Sunday’s 23-16 loss to the Atlanta Falcons, the job belongs to Siemian.

It’s not that Lynch played poorly. His numbers were not too unlike what Siemian has had (23-35 for 223 yards, a touchdown, and an interception). He was a rookie making his first start, and they didn’t want to push him to do more than he was ready to do. The Denver brain trust probably looked at the Atlanta defense and thought Lynch could handle one of the league’s worst (entering the game they were 30th overall and 31st against the pass).

“Obviously you have some butterflies in your first NFL start,” Lynch said (ESPN). “It’s not a preseason game and your team is 4-0. You are excited about that, but you have to focus on the team and winning the ballgame. After that first drive, I was ready to go and ready to play with those guys.”

But he didn’t look as good as he might have felt. He often looked a bit nervous and unsettled in the pocket, and his decision making wasn’t always the best. Coming into the game, the Falcons had managed just four sacks, but they got to Lynch six times.

Siemian has been sacked eight times; five in the first three games and three before leaving the Tampa Bay game with an injury.

Lynch had all of 101 yards passing entering the final quarter before making a valiant effort in the fourth quarter to bring the team back. However, to be fair, Lynch did not get as much help from the defense or running game as Siemian has.

The protection wasn’t as good, and the run game was just as anemic as it has been for much of the season. C.J. Anderson had just 41 yards on 11 carries; his third game in a row with less than 50 yards. The running game as a whole has failed to crack 100 total yards for the last three games.

It also didn’t help that the defense had one of their worst efforts of the season as well. The Falcons didn’t try to throw deep to Julio Jones like the Broncos probably expected. Instead, Matt Ryan threw to the running backs on short to midrange plays—who the Denver linebackers had trouble covering.

“They spread us out,” Broncos coach Gary Kubiak said. “The key problem was that they had time to get those guys down the field … for their backs to get down the field the way they did is going to take some time. You can’t ask ‘B-Marsh’ (Marshall) and those guys, Todd (Davis), to hold up that long. It was a very good job on their part … (the running backs) did a hell of a job.”

Maybe if he had a run game the defense had to respect supporting him, Lynch could have looked better. Maybe if the defense had been its usual dominant self, he wouldn’t have needed to look much better than he did. Maybe he just isn’t ready yet.

Ready or not, it will be awhile before he gets another chance since Siemian is expected to play Thursday night against the Chargers.