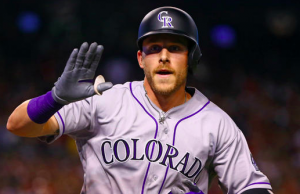 Colorado Rockies shortstop Trevor Story was one of the biggest surprises of the 2016 season. He went from being a placeholder while Jose Reyes served a suspension for domestic violence to being one of the best rookies in baseball and a player the Rockies have penciled in as their future shortstop. Unfortunately, a thumb injury he suffered at the end of July ended his season early and prevented him from having a realistic chance of winning Rookie of the Year. However, with spring training right around the corner, Story says he’s healthy and ready for his encore.

Story hit the ground running in a way no other player has in baseball history. He made his major league debut on opening day, and hit two home runs against Arizona ace Zack Greinke. That game turned out to be merely the first of two multi-homer games during Story’s first week in the big leagues. Story ended up hitting seven home runs in his first six big league games, setting the stage for a sensational rookie season.

Before Story was struck down by the thumb injury, he hit .272 and posted a .909 OPS, hitting 27 home runs in 97 games. Despite missing the final two months of the season, Story hit more home runs than Dodgers shortstop Corey Seager, who ultimately won Rookie of the Year. Had he played the final two months, Story would have most likely tied or surpassed Nomar Garciparra’s record of 30 home runs by a rookie shortstop.

Perhaps more importantly, Story’s performance helped make the Rockies a competitive team in 2016. Before the injury, Colorado was a .500 team within five games of a wild card spot. However, the Rockies were 12 games under .500 after Story went to the DL, once again falling well short of a playoff spot. Not all of the team’s struggles during the final two months can be blamed on the absence of Story, but it’s impossible not to see the correlation.

For Story, missing that time put an asterisk on an otherwise brilliant rookie campaign. “It was tough just because we were playing so well as a team,” Story said about his thumb injury. “Pitching was clicking, offense was clicking. We were on a little win streak too. We felt we could make our move right there. That was the toughest part of it for me, that I couldn’t be out there to help my team for the rest of the season. It just gave me incentive for (this year).”

The good news for the Rockies is that Story’s thumb has fully healed. After enduring plenty of rehab, Story has been cleared for baseball activities for the past two months, and he’s eager to make up for lost time.

“I’m so excited for spring training,” Story said earlier this month. “I feel good, 100 percent ready to go. It’s just very exciting to get together with these guys and go out there and win. I think we can do something special. A lot of the guys feel that way.”

The Rockies haven’t been one of the more active teams in baseball this winter, but they’ve made a few moves that could put them in a position to compete in 2017. Colorado has added Ian Desmond to an already deep lineup and signed pitchers Greg Holland and Mike Dunn to help improve the team’s bullpen. Between those additions and a slew of young players, including Story, ready to improve upon their performance in 2016, the Rockies appear to be in good shape heading into spring training.

Of course, a year ago, the Rockies weren’t sure what to expect from Story, and almost everything he contributed was a bonus. This year, Story is one of the players the Rockies are counting on being a regular contributor. With a player like Story who came out of nowhere, there’s always a chance he has a let down in his second season. But the Rockies don’t appear to be too worried about that possibility.

“He always has a calm demeanor, stays within himself,” Rockies GM Jeff Bridich says about Story. “At the ultimate level that this is, the game can get fast and your mind can get going quickly and you can get distracted. That’s really never happened to Trevor.”