Warriors-Thunder Recap: Chalk Up Another Triple-Double For Russell Westbrook And Another Loss Against Kevin Durant

Even if you don’t follow the NBA, you have probably heard the story by now. Kevin Durant ditched his old team, a bigger contract, and Russell Westbrook for the Golden State Warriors, a not-as-big-but-still-big contract, Steph Curry, and a better chance of winning an NBA title. It was a business decision, but one that Westbrook has taken personally–and it has led to a pair of very entertaining games with at least one more still to come.

Much like the first time these two met back in early November, the game didn’t end up being too competitive. It was through the first half, but the Warriors pulled away in the second to win 121-100.

Like the November game, Westbrook and the Thunder got off to a strong start and led by one, 31-30 (score after one was 32-31 in the first meeting). But Golden State had the edge in the second quarter and outscored the Thunder by one to tie the game at 56-56 at the end of the first half.

But more telling than the score at the end of two periods was something that happened during the last few seconds of the first half. Zaza Pachulia, who like Durant is in his first year with the Warriors, laid down a nice, hard foul on Westbrook that sent him tumbling to the floor where he stayed clutching his face in apparent agony.

So—what’s so telling about that? Well, with a foul that was as hard as that one, you would expect his teammates to come rushing to help him and for some pushing and shoving to occur. Refs tend to let some of that slide since it is only natural to stand up for your teammate—but no one moved to help or defend Westbrook at all.

“I don’t know,” Westbrook said when asked what happened on the play (USAToday). “He hit me kind of hard, but it’s alright. I’m going to get his ass back — straight up.”

The Thunder didn’t even seem to care when Pachulia stood over Westbrook like a gladiator preparing to behead his fallen foe. Westbrook made sure the refs will be keeping a close eye on him the next time these two teams play with a comment he made after the game:

Westbrook went on to record his 21st triple-double of the year with 27 points, 15 rebounds, and 13 assists but had a less-than-stellar night from the floor hitting just eight of 23 shots and only one of six three-point attempts. Count his ten turnovers (that included a tremendous travel where he took six steps), and he had a quadruple-double. 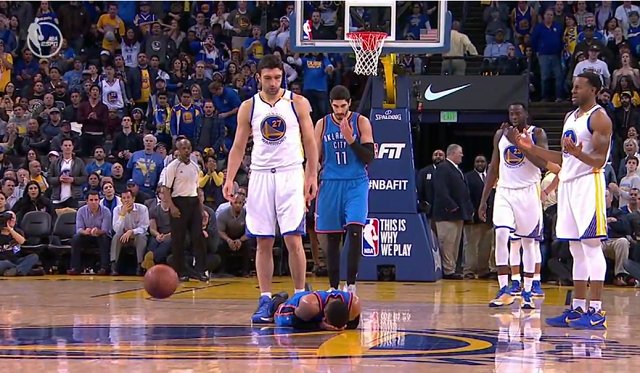 But just like his first reunion with Durant, he was outplayed by his former teammate. Durant didn’t hit a triple-double, but he did score 40 points on a very efficient night from the floor that saw him hit 13 of 16 shots.

“The efficiency of this guy is just amazing. He’s not going to win the MVP because there are a lot of people out there who are playing extremely well,” Warriors coach Steve Kerr said. “But I don’t think anybody’s more efficient. He doesn’t need the ball, and he still scores big numbers.”

Durant has tried to maintain that he and Westbrook are friends still, but it sure didn’t look like when Westbrook was caught chastising teammates that wanted to talk to Durant after the game.

The win improves Golden State’s record to 36-6, but they will have a tough on their hands next when the travel to Houston to play the Rockets Friday.

Durant and Westbrook will meet one more time (barring a playoff series) when the Warriors travel to Oklahoma City for a game February 11.