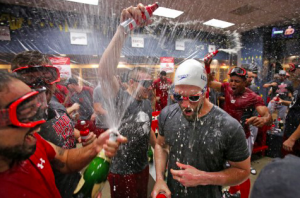 After waiting out what was nearly the most incredible comeback in recent memory, the Washington Nationals clinched the NL East Division title. After defeating the Pittsburgh Pirates 6-1, the Nationals had to wait to see if the New York Mets lost in order to officially celebrate a division title. The Mets trailed the Philadelphia Phillies 10-0 early in Saturday’s game, only to come storming back to make it 10-8. The Mets then had the tying runs on base in the bottom of the 9th but couldn’t come all the way back, allowing the Nationals to finally celebrate winning the division they’ve controlled for much of the year.

“You just knew it was going to happen,” right-hander Max Scherzer said. “We could feel it in the air, we started celebrating. We knew everything that’s been happening, we’re going to be popping champagne in here. It was just one of those things you could feel unfold.”

Of course, the moment was a little odd for Daniel Murphy, who spent his entire career with the Mets until signing with the Nationals this past offseason. “I don’t know that I’ve ever rooted for the Phillies so hard,” Murphy said. “I didn’t like a lot of these guys for a long time. To come together all of us, pulling in the same direction to accomplish a goal, it’s awesome. Words can’t explain how much fun this is.”

Even for a veteran of clubhouse celebrations like Jayson Werth, took the time to enjoy the moment. “I think this is my eighth or ninth division title, and it never gets old,” he explained. “Guys who haven’t done this, this means a lot to them. But this is just step one.”

Werth also praised Washington’s division title as a team effort. ” It was everybody. Everybody contributed,” said Werth from his dry nook in the corner,” Werth said. “You can look at everybody on the team and say that guy’s the reason why we’re here. That’s what good teams are about. We’ve got our potential MVP candidate. We’ve got our potential Cy Young award winner. But everybody’s contributed.”

Beyond each and every player who contributed, key to Washington’s success this year was the arrival of new manager Dusty Baker. “That’s what I came here for,” Baker said. “This is what I expect and I think this is what these guys expected, too. From Spring Training, we talked about where we wanted to go, what we had to do, and they worked hard for it. And I mean this is something. I want these guys to enjoy it and just have a good time.”

The Nationals figure to make some lineup changes on Sunday before refocusing their attention on the postseason the final week of the regular season. Since moving from Montreal, the Nationals have won the NL East on two previous occasions, only to lose in the NLDS each time. Washington strives to put those poor postseason memories behind them. However, few view them as favorites in the National League, giving the Nationals much to prove the rest of the way.