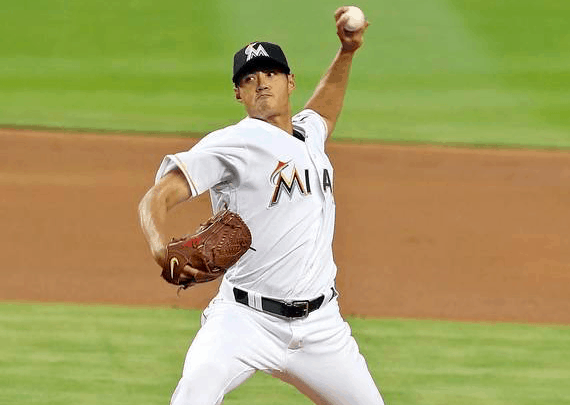 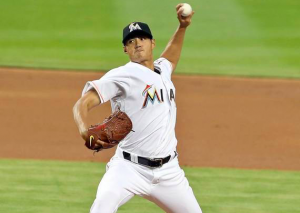 The playoff hopes for the Miami Marlins have taken a meaningful hit. The Marlins placed starting pitcher Wei-Yin Chen on the 15-day DL Sunday with what the team is calling an elbow sprain. Chen last pitched Wednesday, allowing four runs on 11 hits over 5.1 innings in a loss to the Philadelphia Phillies. Miami recalled Jarred Cosart from the minors. Cosart will take Chen’s spot in the rotation and start Monday night against the Phillies.

“Wei-Yin came in after the last start a little bit tender in his elbow,” Miami manager Don Mattingly told reporters Sunday. “We’ve got to be cautious. We can’t afford to let that thing get away from us, so we have to be cautious with him, and bring up Jarred.”

“I have been experiencing some soreness in the elbow since the last start,” Chen explained. “We had some discussion between me, the pitching coach and the manager, and we’ll see. We’ll give it a couple of days of rest and see what happens.”

Miami is hopeful that the injury is relatively minor and that Chen will be able to return in short order. Of course, there is rarely any kind of certainty when it comes to a pitcher’s elbow. “The team is in the race, and this is a very important time,” Chen said. “But for me, I’d like to help the team when I’m 100 percent. I don’t want to rush out there when I’m not 100 percent.”

Chen was supposed to be a game changer for the Marlins this season after signing him to a five-year, $80 million contract during the offseason. He spent the previous four seasons with the Baltimore Orioles, and posted a 3.34 ERA over 31 starts last season. However, Chen has been up and down this season, going 5-4 with a 4.99 ERA over 19 starts.

Nevertheless, the Marlins would no doubt prefer to have him healthy for the stretch run. Despite Chen’s struggles this season, the already limited depth in Miami’s rotation takes a significant hit with him on the DL. Outside of Jose Fernandez and Adam Conley, the Marlins have struggled to find competent starting pitchers this season, forcing their offense to carry the team.

Cosart will get the first shot at replacing Chen. He began the season in Miami’s rotation, but after three poor starts in which he posted an ERA of 7.98, he was demoted to triple-A. Cosart missed time due to an oblique injury while in the minors this season but returned from the injury earlier this month. In 10 starts at triple-A this year, Cosart is 3-4 with a 4.09 ERA, with his control being an issue, walking 25 in 50.2 innings of work. However, Mattingly is confident in Cosart heading into his start Monday. “He’s been good, according to our reports from Triple-A,” Mattingly said. “He’s the guy right now throwing the ball better than anyone else. He’s earned this start.”

The injury to Chen and the uncertainty regarding his return makes Miami that much more desperate to acquire a starting pitcher via trade before the August 1 deadline. The Marlins have been connected to several starting pitchers, with Jeremy Hellickson of the Phillies reportedly being towards the top of their list. Miami currently holds the slimmest of leads for the second wild card spot in the National League, just half a game ahead of the New York Mets. The injury to Chen hurts, and whether it comes from Cosart, Chen upon his return, or someone they acquire, the Marlins will need better starting pitching if they hope to reach the postseason in 2016.