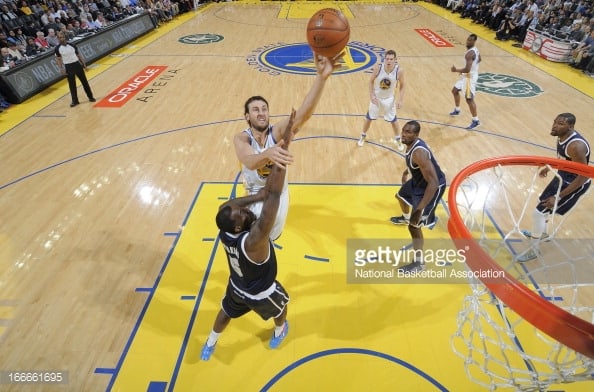 Steph Curry said that the Golden State Warriors were not done after they lost Game Four. At the time, it was hard to believe him. You wanted to after the way he and the Warriors have captivated basketball fans the last two seasons.

However, with the way Curry and the Warriors have played the last couple of games it was kind of hard to.

If it was, something was going to have to happen. The Warriors would have to figure out how to beat the Thunder defense and slow down their offense. Steph Curry needed to find his shot again. It would help if someone else would step up and have a big game too.

Kevin Durant scored 40 and Russell Westbrook 31, so the Warriors didn’t exactly slow down the Thunder offense. Steph Curry did score 31, but he was 9-20 from the floor and 3-8 from behind the arc, so he didn’t really find his shot. Klay Thompson had a poor shooting night as well going 8-21 from the floor and 2-9 from three-point range.

Somehow the Warriors managed to stay in control for most of the game and stave off elimination for the night with a 120-111 victory—and fans should thank Andrew Bogut for making it happen.

“I had four crappy games, so I tried to have a good fifth one. I didn’t want to have it end tonight, so we have a puncher’s chance. Obviously, it is a very tough place to play, but we feel like we can play better than we did tonight,” Bogut told the media after the game.

The big man had his most productive game of the post season and one of his best of the season with 15 points, 14 rebounds, and a pair of blocks. His presence at the center made it tough on the Thunder to drive the lane for easy points. Durant and Westbrook did combine to score 71 points, but they missed 36 shots.

“I thought Boges was phenomenal,” Kerr told reporters. “He rebounded, scored, was aggressive…Boges is our best defender. He takes up a lot of space, challenges everything at the rim. Staying out of foul trouble allowed us to keep him on the floor.”

This time, it was the Thunder’s big man, Steve Adams, that had early foul trouble. After the game, Thunder head coach Billy Donovan admitted Adams’ foul issues hurt the team early on.

“(It was) one of the things that hurt our rhythm and flow a little bit,” Donovan said. “We had to take him out of the game.”

While the win keeps the Warriors alive, they still have to win one in Oklahoma City to bring the series back to Oakland for Game Seven. If they are going to have a chance, they will need to get out to an early start and take the crowd out of the game so Durant and Westbrook can’t feed off of their energy.

For that to happen, they really need Steph Curry to find his shot again. Few things are as demoralizing as playing solid defense and seeing someone hit shots from five feet behind the three-point line like he was shooting free throws. He’s only shot better than 50 percent from the floor once since returning from his knee injury.

He is going to have to be the shooter that Russell Westbrook says he is.