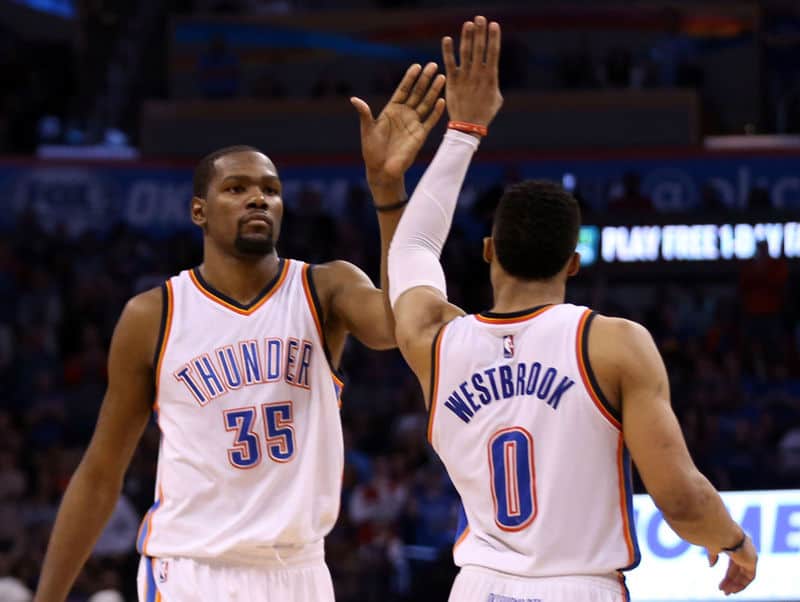 For the duration of the regular season, the prevailing logic among many experts and fans was that the playoffs would be a formality for the Golden State Warriors. The defending champions appeared to be the best team in the NBA, and there was no reason to think anyone could take them in a best of seven .

In spite of how the Oklahoma City Thunder elevated their play against the San Antonio Spurs, most of the experts still thought the Warriors would have no trouble making the Finals. However, after the way they were trounced by the Thunder in Game Three Sunday night, many of those “experts” are going to be eating their words.

So far this series has been won by the team whose stars didn’t play as bad as the other team’s stars. Steph Curry has had some trouble finding his shot, and Klay Thompson has not been s accurate as fans have come to expect either. Russell Westbrook and Kevin Durant have thrown up more than their share of bricks in the first two games of the series as well.

But they didn’t throw up many bricks Sunday night.

The Thunder got 63 points out of their two stars who combined to make 20 of 34 attempts from the floor and 21 of 23 free throws. They could have done even more damage, but after a 45-point third quarter had given Oklahoma City an 117-80 lead heading into the final period, their services were no longer needed.

“We got our butts kicked,” Warriors head coach Steve Kerr said after the game. “It doesn’t matter if it’s [a loss by] one point or 30, you have to look at the tape and figure out how you can be better, and you come back with a better effort. But [the Thunder] were the more desperate team tonight.”

For the Warriors to survive a hot game by Durant and Westbrook, they needed Steph Curry and Klay Thompson to counter with even better games. Instead, the Splash Brothers never made it out of the kiddie pool. The duo were only 9 of 27 in the first half and combined to go 15 of 36 on the night for just 42 points.

A little help from the rest of the roster would have been nice, but they got none. Draymond Green hit his only basket in the first half and had only six points on the night. His biggest impact came in the first half when he kicked Thunder center Steve Adams in the groin.

It came at the 5:57 mark in the second quarter. The Thunder responded to it with a 24-7 run to end the half.

The kick was a hot topic after the game with Russell Westbrook saying it looked intentional to him and the Warriors all saying it wasn’t. Many media pundits and experts think a suspension is deserved, but Green insists it wasn’t on purpose.

“I thought it would probably get rescinded (the Flagrant One call). It was a follow through on a shot,” Green said after the game. “I’m not trying to kick somebody … in the midsection. I’m sure he would want to have kids someday, and I’m not trying to end that on the basketball court. That don’t make sense.”

If the Warriors are going to even up the series with a win in Game Four, they are going to have to start knocking down some shots or do a better job on the boards. They don’t necessarily need to win the battle of the boards, but they do need to make it close.