What More Do The Carolina Panthers Want From Ron Rivera? 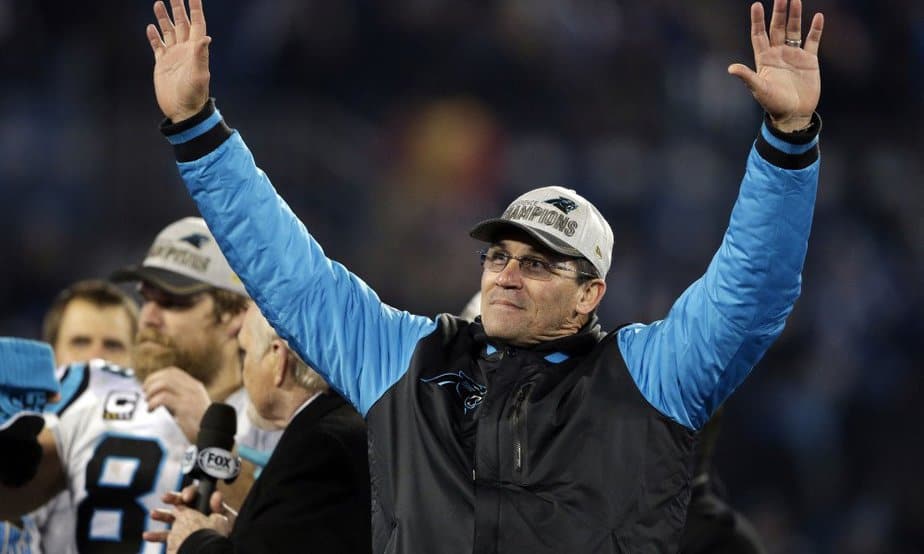 Good, quality football coaches can be hard to come by in the NFL. Sometimes guys end up being just a flash in the pan. Others are products of their talent, but some are great at getting the best out of every player on the roster. When a team is lucky enough to find one of them, it would be smart to lock him up for years to come.

But for some strange reason, the Carolina Panthers are not doing that.

“It was an easy decision,” Panthers GM Dave Gettleman said in the Charlotte Observer. “Ron has worked extremely hard, and we are thrilled with our current direction. Mr. (Panthers owner Jerry) Richardson has established a great culture here, and Ron is a big part of that.”

So what they really did was figure out how to pay him more now rather than make him wait till his current extension expired. However, at the same time, they didn’t offer him the one thing that matters most to football players and coaches—security.

Rivera was on the hot seat heading into the 2013 season even though the team had improved since he had taken over. The season before his arrival they went 2-14. In his first year, the Panthers improved to 6-10 and in his second year 7-9.

A poll conducted by a local Charlotte paper indicated that 83 percent of local fans thought he should be fired heading into the 2013 season. After starting the ’13 season, 1-3 some thought he should have been fired before Week Five. The team ended up going 11-1 for the remainder of the season, winning the division, and earning a first-round bye in the playoffs.

For his efforts, Rivera was named Coach of the Year and awarded with a three-year contract extension.

The team slipped down to 7-8-1 the following year, but the rest of the division stunk, and they still won the division. Last year they went 15-1 in the regular season, won the division for the third year in a row, and made it to the Super Bowl.

Rivera was named the Coach of the Year for the second time in three years—but only got a one-year extension.

Yes, the pay raise is nice, but they only wanted to commit to him for one more year than they already had after he guided the team to the Super Bowl.

What more do they want him to do before they are willing to make a serious commitment to the man?

The New Orleans Saints gave Sean Payton a five-year extension even though the Saints have missed the playoffs in three of the last four seasons. Chuck Pagano received a four-year extension when most believed he would be fired. San Diego Chargers head coach Mike McCoy was given an extension through the 2017 season after leading his team to a 4-12 record last season (after two 9-7 records).

Lesser coaches without the accolades Rivera has earned have been given better deals than the Panthers have given their head coach. You would think that after building the team up the way he has and with the success of the last three years, the Panthers would give him a raise and a long-term deal—but they didn’t.

Should the Panthers slip and the team blames it on Rivera, with his track record he will not remain on the open market for long.