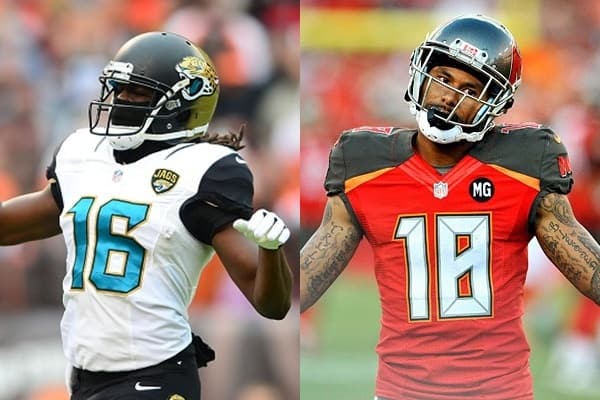 July can be a dangerous month for NFL players. With the new season fast approaching many like to take advantage of their last opportunity to relax and spend time with friends and family before having to buckle down for the coming season. Many will take vacations, some will stay at home, others will train, and some will party like they are never going to party again. Whatever they do, since money is not an issue, they often tend to have a really good time—too good even.

It never fails. Someone always ends up getting in trouble.

So far, former players have been getting in more trouble than active ones, but over the Fourth of July weekend a pair of guys—Jacksonville Jaguars running back Denard Robinson and Tampa Bay Buccaneers wide receiver Louis Murphy—were involved in incidents that could have resulted in both getting in serious trouble.

Both were lucky they didn’t end up getting in any trouble–but who was luckier? To figure that out, it would help to examine their incidents.

Sunday night, as the story goes, Denard Robinson fell asleep at the wheel, drove his car off the road, and crashed it into a retention pond. When police responded to the scene, he and his passenger both preferred to stay asleep rather than get out of the car, but with the car sinking into the pond the officer had to pull them out.

The official word is that Robinson was just asleep, but to be as uncooperative and resistant as he was with the officer you would think he had to be under the influence of something.  But a second officer at the scene said he was not, and no charges were filed.

His passenger had her nap interrupted as well but was otherwise okay.

Murphy’s incident centered around an untimely nap as well, but under different circumstances. He was in Palm Beach for the wedding of a former college teammate, Deonte Thompson. Murphy enjoyed a few drinks during the reception, walked off to the museum courtyard, and ‘fell asleep’ (passed out) on the stairs.

When he woke up, everyone was gone, the lights were out, and the museum was closed. He ended up breaking a pane of glass on a door so he could get out. Rather than just go home, he called a friend who called 911. The police arrived as well as someone with the museum.

Murphy agreed to cover the damages (estimated at $1000), and he went home. No charges were filed.

“This was really just a series of small unfortunate circumstances,” Murphy said Wednesday in a statement. “With no one around, my only option was to break a small glass pane of the door in order to access a phone and call for help. I dialed the police and explained that I needed assistance. It’s unfortunate that I needed to break the glass, but the police officers on the scene and museum staff acknowledged that I didn’t have many other options. I’m working with the museum to ensure everything is properly handled.”

The situations could have easily been so much worse for both players. If Robinson wasn’t intoxicated, he might want to get some sleep testing done. Sleeping as hard as he had to be to react like he did during his incident can’t be normal. Murphy could have easily been hit with a trespassing charge and maybe public intoxication (if he was still under the influence when police arrived).

Both are lucky their situations did not end up being much worse than they were—but who was luckier? It has to be Robinson. His incident is still being investigated so he could still get in trouble, but he didn’t get hurt or hurt anyone else. When you consider what could have possibly happened, sinking into a retention pond is one of the better scenarios.