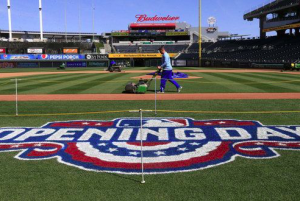 Chicago Cubs, 11/2 – The core of this young team is back, and on paper, the Cubs still look like the most talented team in baseball.

Cleveland Indians, 8/1 – Had the Indians had a healthy rotation last season, they could have beat the Cubs. The addition of Edwin Encarnacion and return of Michael Brantley could be the difference in 2017.

Boston Red Sox, 9/1 – If Boston’s rotation is healthy for the postseason, the Red Sox can match up with anybody. David Ortiz is gone, but they should have enough young, emerging players to help make up for his absence.

Los Angeles Dodgers, 9/1 – The duo of Clayton Kershaw and Rich Hill would be formidable in the postseason, and after four straight NL West titles, getting to the postseason hasn’t been a problem in recent years.

Washington Nationals, 14/1 – Washington has two elite starters in Stephen Strasburg and Max Scherzer and two elite offensive threats in Daniel Murphy and Bryce Harper, but the rest of the roster needs to step up.

Houston Astros, 18/1 – Offensively, the Astros are as scary as any team in baseball, but whether they can match that pitching wise is a huge question mark.

New York Mets, 18/1 – If their pitching is healthy, the Mets may have the best and deepest rotation in baseball. That rotation can carry them all the way, especially if their lineup can contribute to the cause.

San Francisco Giants, 24/1 – The Giants have been forgotten about just a little, but they have enough to sneak up on people and make a run.

Toronto Blue Jays, 24/1 – Toronto’s rotation could be the most consistent in baseball one through five, but the Blue Jays will need to stay healthy in order to get over the hump after back-to-back trips to the ALCS.

St. Louis Cardinals, 33/1 – There are too many rotation questions to foresee a deep postseason run, although offensively, the Cardinals can hold their own.

Texas Rangers, 33/1 – The Rangers lack the same dynamic offense they had a year ago. The pitching may be better with Cole Hamels and Yu Darvish, but beyond that, the rotation has question marks.

Detroit Tigers, 33/1 – If Jordan Zimmermann can bounce back, the Tigers have a formidable trio atop their rotation. They could be a great sleeper pick if not for the Indians being heavy favorites in the AL Central.

New York Yankees, 40/1 – The Bronx Bombers will definitely be interesting to watch this year, but they’ll be relying heavily on young players, making a World Series run unlikely.

Seattle Mariners, 40/1 – The Mariners are definitely one of the more intriguing teams, as they have a solid rotation and an interesting combination of speed and power in their lineup.

Kansas City Royals, 45/1 – The bullpen in Kansas City is not what it used to be, and while the Royals can stay competitive if they stay healthy, a World Series doesn’t appear to be in the cards.

Baltimore Orioles, 50/1 – The O’s will hit plenty of home runs, again, but a lack of rotation depth could hinder them in a difficult division.

Colorado Rockies, 50/1 – A young and promising rotation makes them an interesting team to watch and a potential sleeper. As usual, scoring runs will not be an issue.

Los Angeles Angels, 66/1 – Several additions to the lineup will make the Halos interesting to watch this year. However, the health of their pitching staff is too big of an issue to rise to the top of the AL West.

Pittsburgh Pirates, 75/1 – The pitching talent is definitely there to surprise some people, but the loss of Jung Ho Kang to legal issues and the possible decline of Andrew McCutchen brings up some serious questions.

Tampa Bay Rays, 100/1 – Not a terrible bet at 100 to 1; the Rays have a rotation that’s quite promising, but everything will have to go perfectly just to get to the postseason in a competitive AL East.

Minnesota Twins, 115/1 – Minnesota has plenty of young talent that should be interesting to watch, but the Twins definitely don’t have the pitching to stay competitive over 162 games.

Philadelphia Phillies, 125/1 – The young rotation offers some promise, but it’s tough to be sold on all of Philadelphia’s young position players just yet.

Miami Marlins, 125/1 – The Marlins have a dynamic outfield and plenty of power; however, the team’s rotation won’t stack up to the Mets and Nationals in the NL East.

Oakland Athletics, 130/1 – There should be some progress this season in Oakland, as there are plenty of good, young pitchers, but there are still too many holes in the lineup.

Atlanta Braves, 150/1 – This team is probably a year or two away from making some serious noise. However, adding several veteran pitchers should keep the Braves in contention more than most people think.

Arizona Diamondbacks, 160/1 – They get to hit the reset button after a disappointing 2016. If the Diamondbacks get the pitching they thought they would get last season from Zack Greinke, Shelby Miller, and Patrick Corbin, they could surprise some people.

Cincinnati Reds, 200/1 – Injuries to the rotation have hurt the Reds before the season starts. It’ll be a struggle, but there are a few good, young position players to watch.

Milwaukee Brewers, 200/1 – This team is still a couple years away from being competitive. The Brewers have a few of the pieces in place, but not nearly enough.

San Diego Padres, 275/1 – The Padres are a few years away and they know it. But they do have Will Myers locked up long term and a couple of their top prospects will have a chance to play prominent roles this season.

Chicago White Sox, 300/1 – The team has already traded Chris Sale and Adam Eaton, and more trades are likely before season’s end. However, the White Sox have accumulated tons of young talent and will be a team to watch in a couple years.