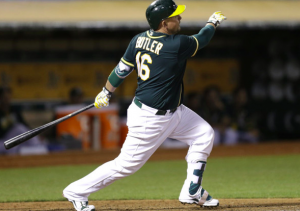 Less than a day after losing rookie Aaron Judge to what appears to be a season-ending injury, the New York Yankees have reportedly agreed to sign DH and first baseman Billy Butler. Butler was released by the Oakland Athletics earlier this week with a year left on his contract due to the diminished role he would have had in Oakland moving forward. He will not be eligible to play in the postseason, but he will be able to help the Yankees for the rest of the regular season as they cling to slim playoff hopes.

It wasn’t clear when Butler was released by the A’s if he would sign on with another team for the rest of the season or simply re-assess his options this winter. But with the injury to Judge gave the Yankees a need for a player like him. Butler won’t be able to fill the void that Judge leaves in right field, but he’s capable of playing first base if necessary, which will make it easier to move Tyler Austin to right field. Of course, it’s more likely that Butler will get most of his at bats as a DH.

Butler gives the Yankees a right-handed bat capable of producing power, as the team prepares to face several left-handed pitchers on its upcoming 11-game road trip. Butler has traditionally mashed lefties during his career; however, part of the reason the A’s were eager to cut ties with him was because his numbers against lefties were down this year. Nevertheless, the Yankees have little to lose by bringing Butler onboard for the remainder of the regular season.

Butler also has some postseason experience after spending the 2014 season with the Kansas City Royals, who were World Series runners up that season. Butler won’t be eligible to play in the postseason if the Yankees make it, but at this point in the season, every game the Yankees play is akin to a playoff game.

Whether Butler may be in New York’s plans beyond this season remains to be seen. Since his deal with the A’s was through the 2017 season, a team would only need to pay him the league minimum next year, which is what the Yankees are doing for the remainder of the season. The makes the addition of Butler a low-risk move with some upside for the Yankees.

At the moment, the Yankees are just two games behind the Toronto Blue Jays for the second wild card spot in the American League. At this point, the team is willing to try anything that a has a chance to help them reach the postseason, which is why Butler has reportedly signed on with the Yankees and will spend the rest of the season trying to help the Bronx Bombers reach the playoffs.