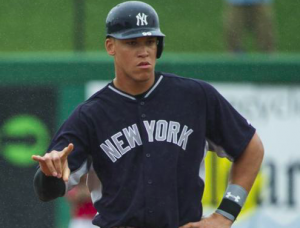 The New York Yankees have answered the question as to who will replace Alex Rodriguez on the active roster, and it’s outfield prospect Aaron Judge. After Yankee fans wished Rodriguez a fond farewell on Friday night, the Yankees released A-Rod on Saturday and purchased the contracts of both Judge and Tyler Austin. The Yankees also optioned pitcher Ben Heller to triple-A to make room for both Judge and Austin on the roster. Both Judge and Austin are in the starting lineup for New York’s Saturday matinee against the Tampa Bay Rays.

Judge is the far more heralded of the two prospects who will make their major league debut Saturday. According to MLB.com, Judge is the 4th best prospect in the Yankees farm system and the 27th ranked prospect in all of baseball. He brings massive size (6′ 7” and 275 lbs.) and has plus raw power. He’s considered a good athlete who moves well for his size and also possesses above-average arm strength.

Yankees GM Brian Cashman has said that Judge will be the every day right fielder for the Yankees moving forward. Many consider him to be the team’s right fielder of the future. In 93 games at triple-A this season, Judge has hit .270 with 19 home runs and 18 doubles, producing an OPS of .854. The presence of Judge is likely to take playing time away from Aaron Hicks, who has started 69 games in right field for the Yankees this year, and been New York’s primary option there since trading Carlos Beltran. Of course, Hicks is hitting just .198 on the season.

While Judge is a former first round pick who took the fast track to the big leagues, Austin has had a much longer road to his major league debut. He was drafted by the Yankees as a 13th round pick in 2010, making 2016 his seventh season playing minor league baseball. He’s had plenty of ups and downs during those seven years, and was even added and subsequently removed from the 40-man roster at one point.

But Austin has persevered and had a strong 2016 season, splitting time between double-A and triple-A. In 57 games at triple-A, Austin hit .323 with 13 home runs and 24 doubles, giving him an OPS of 1.051 and earning a big league promotion. Austin is capable of playing first base, third base, and both corner outfield spots, although most of his playing time with the Yankees figures to come at first base, which will reduce playing time for Mark Teixeira, who will retire after the season.

The official release of Rodriguez and the call ups of Judge and Austin further signal a growing youth movement for the Yankees. Earlier this month, the Yankees also recalled catcher Gary Sanchez, another top prospect. Many are expecting Sanchez and Judge to be important pieces in the Yankees future, while Austin is also playing for the right to be included in the team’s long-term plans. The Yankees may be on the edge of contention as far as the standings are concerned, but the continued influx of young talent will make them a team to watch with great interest for the remainder of the season.