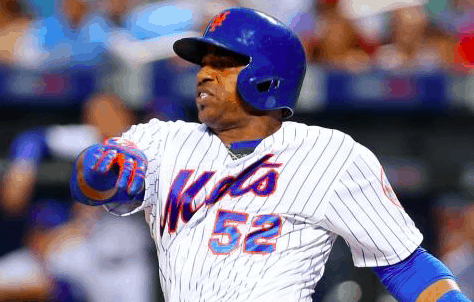 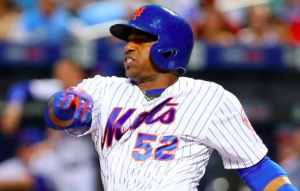 The injury woes keep piling up for the New York Mets. On Friday, the club placed outfielder Yoenis Cespedes on the 10-day DL with a strained hamstring. Cespedes pulled up lame while running to second base on a double during Thursday’s loss to the Braves. The injury comes less than a week after Cespedes sat out a few days because of a less serious issue in the same left hamstring and comes at a dire time for the Mets, who have lost 10 of their last 11 games.

“It’s easy to sit back today because he pulled a muscle and say, ‘Hey look, he wasn’t ready to play,'” Mets manager Terry Collins said. “You can write all you want that we should have put him on the DL. Well we didn’t because we didn’t think it was necessary, because he said he was going to be ready to play. Now he’s going to be out for a while.”

The Mets haven’t put a timeline on the injury, but they don’t appear to be optimistic about how long Cespedes will be out. Cespedes is expected to travel to the team’s spring training complex in Florida, where he may receive a platelet-rich plasma injection to help his hamstring heal.

Cespedes joins slugging first baseman Lucas Duda, valued utility man Wilmer Flores, and of course, captain David Wright on the DL. The Mets are also without starting pitchers Steven Matz and Seth Lugo, and had to scratch ace Noah Syndergaard from his start on Thursday due to a biceps issue.

With Cespedes joining Duda on the DL, the Mets are now without their two biggest home runs threats, which is not ideal for a team that relies on the long ball to score runs as much as any team in baseball. The injury to Cespedes does open the door for Michael Conforto to play left field every day, although Conforto was already playing every day with Jay Bruce filling in for Duda at first base.

Aside from Conforto, Bruce, and the injured tandem of Cespedes and Duda, the Mets have struggled to get anything going offensively this season. Jose Reyes, Curtis Granderson, and Neil Walker have all had disappointing performances over the first month of the season. With the struggles of those players on top of all the injuries, the Mets have had difficulty scoring runs on a consistent basis.

Now a team that is ravaged by injuries and lost 10 of its last 11 games has to pick itself up and get things turned around regardless of who’s on the DL. Thursday’s loss was their sixth in a row and dropped the Mets to last place in the NL East. If they can’t start to rattle off a few wins in a row, they risk falling too far behind the Washington Nationals early in the season. Of course, last fall, the Mets survived a barrage of injuries late in the season and still managed to capture a wild card spot, so there should be some reason for optimism.

“It’s now time to go out and grind it out as we did last year,” Collins told the media Thursday, paraphrasing what he told his players. “It’s still April. I understand that. But we can no longer sit back and say, ‘Hey look, it’s ugly weather, we’ve got some guys hurt.’ No one cares. They don’t care. The Nationals won’t care. (The media) doesn’t care. The only thing that matters are the guys in that room. That’s the product. They’ve got to care. They’ve got to come out, play with some energy and get this thing going, and I truly believe we can do it.”

Ever since the team’s run to the World Series in 2015, Cespedes has been the biggest catalyst for Mets success. But with him being out for the foreseeable future, the Mets know that they have to find a way to win games without him.

“We’re going to see what we’re made of,” Reyes said. “We’re not going to have him for a little while. Right now, we cannot worry about Yoenis Cespedes.”