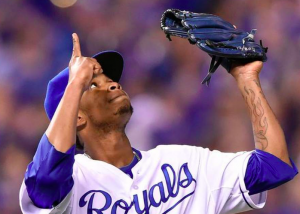 For the second time in less than four months, the baseball world has lost one of its brightest young pitching stars far too soon. Officials in the Dominican Republic confirmed Sunday morning that Kansas City Royals pitcher Yordano Ventura has died in a car crash. He was 25 years old.

The Royals released a statement Sunday morning confirming Ventura’s passing. “Our prayers right now are with Yordano’s family as we mourn this young man’s passing,” said Royals GM Dayton Moore. “He was so young and so talented, full of youthful exuberance and always brought a smile to everyone he interacted with. We will get through this as an organization, but right now is a time to mourn and celebrate the life of Yordano.”

Ventura passes away on the same day as former big leaguer Andy Marte, who died in a separate car accident in the Dominican Republic, making this a heartbreaking day for the baseball world. Sunday’s tragedy comes less than four months after the baseball world endured the tragic passing of Miami Marlins ace Jose Fernandez in a boating accident.

During his final start of the 2016 season, and what is now the final start of his career, Ventura paid tribute to both Fernandez and St. Louis Cardinals outfielder Oscar Taveras, a close friend of Ventura’s who died in a car crash in the Dominican Republic in October 2014. Sadly, Ventura and Taveras, as well as Ventura and Fernandez, will be forever linked for all the wrong reasons.

Ventura grew up in the Dominican Republic, signing with the Royals in 2008. Despite being undersized for a starting pitcher at 6′ 0” and 195 lbs., Ventura was one of the hardest throwing starters in the majors. He made his big league debut in September 2013. After winning 14 games and posting a 3.20 ERA in his first full big league season in 2014, the Royals signed him to a five-year, $23 million deal.

As a rookie in 2014, Ventura made four postseason starts, including Game 6 of the World Series when he threw seven shutout innings to help force a Game 7. He pitched that game while still mourning the death of Taveras, who died just two days earlier. Ventura then started five games for Kansas City during the postseason in 2015, playing a role in the Royals winning the World Series for the first time in 30 years. The Royals were counting on Ventura to help lead their rotation for many years to come.

“We are deeply saddened to learn of the tragic passing of Andy Marte and Yordano Ventura,” said MLBPA Executive Director Tony Clark in a statement. “It’s never easy to lost a member of our fraternity, and there are no words to describe the feeling of losing two young men in the prime of their lives. Our thoughts and prayers go out to their families, friends, teammates and fans throughout the United States and Latin America.”

Countless players and fans have taken to social media to express their grief and memories of both Ventura and Marte on what many in the baseball world are calling Black Sunday.