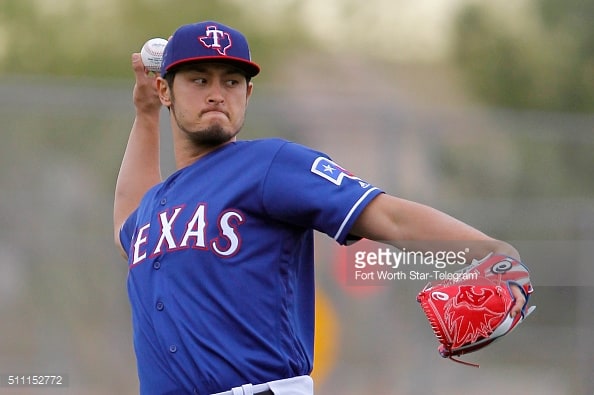 Yu Darvish stepped on a big league mound Saturday night for the first time in nearly 22 months, and he looked like he hadn’t missed a beat. Darvish made his long-awaited return to the Texas Rangers after undergoing Tommy John surgery last March. He threw 81 pitches, lasting five innings, allowing one run on three hits while striking out seven. He also earned the win, as the Rangers beat the Pittsburgh Pirates 5-2.

Darvish was able to hit 98 mph on the radar gun, and impressed both teammates and coaches by looking like he was in mid-season form in his first major league outing since the surgery. “In warmups, he didn’t really let it go. And then warmups in the first inning, he didn’t really let it go,” explains Texas catcher Bobby Wilson. “Then the first couple of hitters, he started letting it go and that ball jumped on me quick. The sinkers that he threw, there was a couple I’m just happy I got a glove on because they were that firm and that nasty.”

The Pirates were also quite impressed with Darvish. “He looked good,” said Pittsburgh first baseman John Jaso. “One thing that he was doing well today was working the ball down, he was painting at the knees really, really well today. I think that was the biggest thing he had going for him besides the velo. You mix those two together and it’s pretty tough.” Jaso added that Darvish did a good job of throwing primarily fastballs the first time through the order and then mixing in his secondary pitches later in the game.

Texas manager Jeff Banister also walked away impressed in his first game actually managing Darvish. “It’s still as electric, explosive as I remember it,” Banister said. “The stuff, when you look at the hitters, and you watch the expressions and their reactions, you can tell the stuff was electric. Just as impressive tonight as it was back then.”

“Physically I could go more innings, but mentally I was done,” said Darvish through an interpreter after pitching in front of a sold-out crowd. Darvish looked calm, cool, and collected on the mound, admitting after the game that he was far more nervous for his first minor league rehab appearance than he was for his return to the majors. He’s also excited for his next start and getting back into the routine of pitching every five days, saying, “I’m not going to be satisfied with one outing. I’ve got the rest of the season to go.”

With Darvish back and looking like his old self, the Rangers now have duel aces at the top of their rotation with Darvish and Cole Hamels. The Texas bullpen has plenty of kinks to work out, but Hamels says that the team’s starting rotation has the potential to rival the rotations he was a part of in Philadelphia that delivered five straight division titles for the Phillies. Hamels admits the Texas rotation isn’t at that level yet, but with Darvish back and looking as good as ever, there’s a chance for the Rangers to have one of the premier rotations in baseball.