Yu Darvish Will Miss Next Start 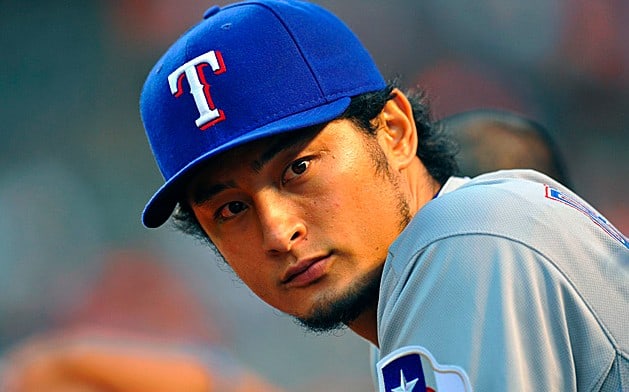 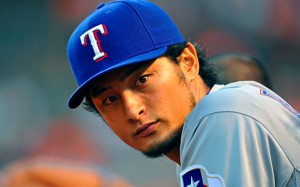 Despite leaving his start this past Wednesday early due to neck and shoulder tightness, Texas Rangers ace Yu Darvish seemed confident he would make his next scheduled start. However, that will not be happening after all. The Rangers announced Saturday that Darvish will not make his start Monday when the Rangers begin a four-game series against the Oakland Athletics.

Darvish was allowed to finish the 5th inning of his start Wednesday after being examined by a trainer in the middle of the inning. However, he was removed from the game following the inning as a precaution. He says that he felt tightness in his neck during the 4th inning and that it moved into his shoulder during the 5th inning. There has also been some concern about his fastball control, with Darvish admitting to take a little off his fastball during the start.

After the game, Darvish, who has made three starts with the Rangers since returning from Tommy John surgery, was confident that he’d make his next start. He threw a bullpen as scheduled on Friday, but his throwing session on Saturday was stopped early and the decision was made to not make his start on Monday.

Darvish says he doesn’t “want to push it and make it worse,” explaining that he’s “heard it’s common for players that have had Tommy John surgery to have issues like this.” The Rangers are currently in Seattle, scheduled to play the rubber game of a three-game set with the Mariners on Sunday before traveling to Oakland on Monday, when Darvish was scheduled to pitch. Instead, Darvish will travel back to Texas and be evaluated by the team’s physician on Monday.

The decision to skip a start is a definite change from the stance Darvish took earlier in the week. However, considering the fact that he is in the early stages of returning from Tommy John, which he underwent in March 2015, it makes sense to take extra precautions. The fact that there is tightness in his shoulder justifies the added concern, as there is always the chance Darvish is overcompensating to protect his surgically repaired elbow.

Texas manager Jeff Banister was upset Saturday night after being flooded with questions about Darvish, asking him to speculate about the pitcher’s long-term prognosis. At the moment, both Darvish and the team are hopeful that a stint on the DL can be avoided, but nothing can be known for sure until Darvish sees the team doctor on Monday.

Even without Darvish in the rotation for much of the year, the Rangers have put together one of the best starting staffs in baseball. The team is yet to announce who will fill in for Darvish on Monday, but Cesar Ramos is a viable option if he’s not used in relief on Sunday. Ramos has not pitched in over a week and started three games for the Rangers earlier this year. In the meantime, all they can do is hope for the best for Darvish.