Zach Britton Headed Back To DL with Forearm Issue 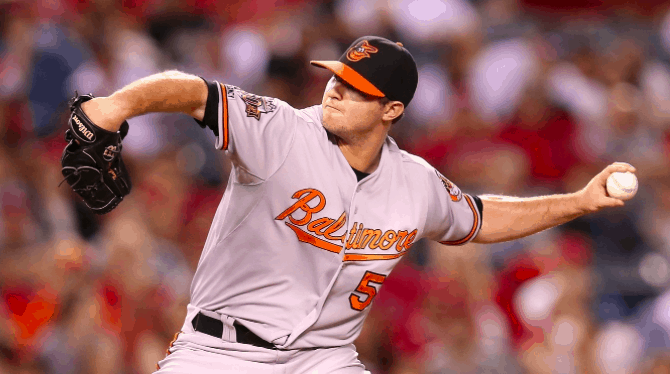 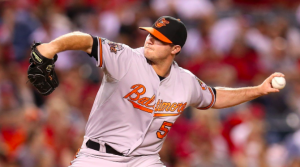 For the second time this season, Baltimore Orioles closer Zach Britton is heading to the 10-day DL. Britton was placed on the DL in the middle of April due to a left forearm strain and missed a little more than two weeks before being activated earlier this week. Since then, he has made two relief appearances, tossing a scoreless inning in each outing. However, sources close to the team indicate that Britton will be going back to the DL due to a recurrence of the pain in his left forearm.

Britton reportedly woke up Friday morning with discomfort in his forearm. Orioles manager Buck Showalter told reporters after Friday’s win over the White Sox that the pain got a little better over the course of the day but that Britton was unavailable for the game. Brad Brach pitched the 9th inning and got the save his Friday’s game, his sixth of the season in the absence of Britton.

As of Friday evening, the Orioles had not yet deciphered the results of an MRI Britton underwent earlier in the day. Reports surfacing Saturday morning indicate that the MRI revealed no structural damage to Britton’s elbow ligaments or any other part of the arm. The issue is simply a muscle strain that has not completely healed.

Reports indicate that Britton will go on the DL and remain on the shelf for at least a few weeks so that the muscle can heal and inflammation in his forearm can subside. It’s still possible, however, that Britton will seek a second opinion from a doctor outside the organization, most likely well-known orthopedic surgeon Dr. Neal ElAttrache.

Despite the discomfort in his forearm, Britton has done well to follow up an amazing season in 2016 in which he saved 47 games in 47 opportunities and posted a 0.54 ERA. However, there’s no denying that he hasn’t been quite as dominant in his eight appearances in 2017. Britton has been successful in all five of his save opportunities and has yielded just one run in nine innings of work. But his strikeout rate is down from last year and opposing batters are hitting .343 against him.

With Britton likely on the DL until the end of May, Brach will continue to deputize as Baltimore’s closer. Brach has six saves in seven opportunities this season, posting a 2.12 ERA. He continues to be one of the most reliable and consistent late-inning relievers in baseball and has had little trouble adjusting to the closer’s role in Britton’s absence. Nevertheless, Britton’s return to the DL will continue to alter the pecking order in Baltimore’s bullpen.

Much like last season, Baltimore’s starting rotation is in the bottom half of the American League in ERA, making the Orioles dependent on a strong bullpen. Baltimore’s bullpen has not been quite at the same level as it was last year, and it’s hard to imagine replicate last year’s domination with Britton on the shelf. Donnie Hart and Michal Givens are both having strong seasons in setup roles, but Darren O’Day has struggled, failing to pitch at the same level as he has in year’s past. So, with Britton back on the DL and O’Day struggling, the Orioles don’t have quite as much bullpen depth as they did a year ago.

At the moment, the Orioles remain in good shape, even without having Britton available for most of April. However, the AL East is shaping up to be a three or four team race, and so every game has a chance to be important at season’s end. Considering how much the Orioles rely on their bullpen, going another few weeks without Britton could prove difficult to overcome.