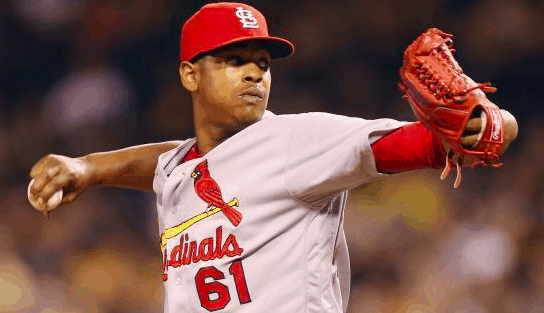 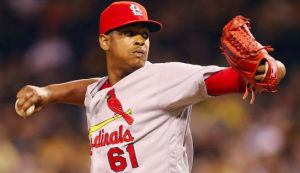 The St. Louis Cardinals have had their worst fears regarding top prospect Alex Reyes confirmed. The Cardinals announced Wednesday that Reyes will undergo Tommy John surgery and miss the entire 2017 season. Reyes was shut down on the first official day of workouts on Tuesday after complaining of elbow pain. He was immediately sent for an MRI that revealed a complete tear in his ulnar collateral ligament.

Cardinals team physician Dr. George Paletta diagnosed Reyes with a full tear of the UCL, confirming the need for Tommy John surgery. The results of Reyes’ MRI have been sent to renowned Tommy John expert Dr. James Andrews for a second opinion, but the Cardinals are not expecting his opinion to be any different from Paletta’s. Cardinals GM John Mozeliak says Reyes will have the surgery on Thursday.

The fact that Reyes needs Tommy John should not come as a complete surprise to the Cardinals. The team has known that he’s had a partial tear of his UCL since 2013, the year after the Cardinals signed him out of the Dominican Republic.

Nevertheless, it is a significant loss for St. Louis. According to MLB.com, Reyes is the 7th best prospect in baseball. He made his big league debut with the Cardinals last August, making five starts and seven relief appearances. That debut came after Reyes served a 50-game suspension for testing positive for marijuana.

In his 12 appearances for the Cardinals last year, Reyes threw 46 innings, posting a 1.57 ERA and striking out 52. That performance had many listing him as an early favorite for Rookie of the Year in 2017. It now appears Reyes will have to wait a year for his first full season in the big leagues. He will also be unable to pitch for the Dominican Republic in the upcoming World Baseball Classic.

“It’s obviously very disappointing,” Mozeliak said. “We had very high expectations for him, but I guess if you’re going to look from a timing standpoint, he has a year to do his rehab and get everything that he’s dealing with under control. And hopefully, he’ll be back better than ever.”

Heading into camp, the role Reyes would have played with the Cardinals this year was yet to be determined. He was in line to compete for the fifth spot in the St. Louis rotation, and so returning to triple-A at the start of the season was a possibility. Of course, the Cardinals also could have chosen to utilize Reyes out of the bullpen, as they did last year.

Mozeliak says the team has no plans to acquire a pitcher from outside the organization to help replace Reyes. “Overall, I feel like we still have that depth,” Mozeliak said. “That’s why we collect it.”

With Reyes officially out of the equation, Michael Wacha is now the obvious favorite to win the final spot in the team’s rotation. Merely fighting for a rotation spot shows how far Wacha has fallen after posting a 5.09 ERA last year. There’s been speculation that Wacha could be moved to the bullpen after his lackluster performance and a stint on the DL due to a shoulder problem in 2016. However, Mozeliak believes Wacha is healthy heading into spring and ready to hold down a spot in the St. Louis rotation.

The Cardinals should have enough pitching depth to survive the 2017 season without Reyes. However, he may have the highest ceiling of any pitcher the Cardinals have outside of Carlos Martinez. Had Reyes lived up to his potential in 2017, he could have been an impact player for the Cardinals and helped St. Louis return to the postseason after being noticeably absent last year. Now the Cardinals can only hope that Reyes makes a full recovery from Tommy John and can one day fulfill his immense promise.